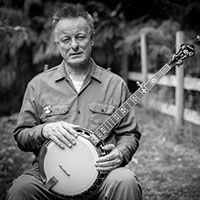 Danny Barnes will be performing an event in the next dates is right in your area. Buy tickets for your favorite performer or group and you will be able to visit his show already tomorrow!

Share with friends:
Updated: 12-02-2022
Danny Barnes is a banjo player, singer, and composer whose music is influenced by country, jazz, blues, punk, metal, and more. He has been described as a "banjo virtuoso" and is "widely acknowledged as one of the best banjo players in America." He was a founding member of the Austin trio the Bad Livers, with whom he toured and recorded extensively from 1990 to 2000. Since then, he has performed and recorded as a solo artist, as well as collaborating with Bill Frisell, Dave Matthews, Jeff Austin and other musicians. In 2013, Barnes and Max Brody formed the Test Apes. In September 2015, Barnes was awarded the Steve Martin Prize for Excellence in Banjo and Bluegrass, in recognition of his role as "one of bluegrass music’s most distinctive and innovative performers." Martin’s website said of Barnes’ work: "The raw and unpolished musical breadth of his compositions has propelled him across the industry today."

In 2000 Barnes, now living in Washington State, dissolved the Bad Livers and founded a new band, Danny Barnes & Thee Old Codgers, with bassist Keith Lowe and violinist Jon Parry. This band released only a single album, 2001's Things I Done Wrong, which was produced by avant-garde jazz composer and pianist Wayne Horvitz (a fellow Seattle resident). 2002 saw Barnes working with jazz guitarist Bill Frisell; Frisell was moving towards incorporating more "American"—country and bluegrass—influences into his playing, and he wanted Barnes to give him lessons in that direction. Their work together led to Barnes playing on Frisell's next album, The Willies; Barnes also toured with Frisell in support of the album.

Since moving to Washington, Barnes has also recorded several solo albums, which were self-released, and a duet effort. His 2003 album Dirt on the Angel, released on Terminus Records, featured Frisell, Chuck Leavell, Darol Anger, and Dirk Powell. In 2004 Barnes participated in Wayne Horvitz's Mylab band and released his second CD for Terminus Records, Get Myself Together. On 9/21/2007, Danny joined Robert Earl Keen during an opening for the Dave Matthews Band in Houston. Danny joined DMB during their song "Bartender." He also joined DMB during their show at Smirnoff Music Centre in Dallas, and at their two shows at the Hollywood Bowl in California to conclude DMB's summer 2007 tour. He joined the band onstage once again for their three-night stand at The Gorge in 2009. He also joined them on stage on June 18, 2010 in Noblesville, Indiana.

In 2015, Barnes played and toured with the Jeff Austin Band. In September 2015, he was awarded the Steve Martin Prize for Excellence in Banjo and Bluegrass. In an interview with Texas Monthly, asked what he intended to do with the prize money, Barnes replied, "I'm going to invest it in my art." In 2017 and 2018, Barnes toured with mandolinist Joe K. Walsh and guitarist Grant Gordy as the Danny Barnes Trio.

Looking for the cheapest concert tickets for the show of Danny Barnes Tour 2023? If yes, then welcome to our portal offering a wide choice of either cheap of VIP tickets. Furthermore, we guarantee that here, you will definitely find so desired tickets for the performance of the Danny Barnes 2022 Tour dates you adore.

The show of Danny Barnes is worth seeing. You won’t regret because this talented person will gift you unforgettable emotions, help you forget about all problems and allow you to jump into the fantastic world of music for only one evening.

The primary target of our service is to offer Danny Barnes tour tickets for the show of your favorite singer at the most affordable price. You may be sure that choosing our ticket service, you will not overpay and get the entrance ticket for the incredible performance, you were waiting for so long. We know everything about the way how a professional ticket service should work. So, with us, you’ll get the lowest Danny Barnes ticket prices and the best places for the show.