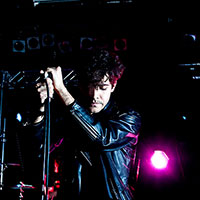 Neon Indian will be performing an event in the next dates is right in your area. Buy tickets for your favorite performer or group and you will be able to visit his show already tomorrow!

Share with friends:
Updated: 01-27-2023
Neon Indian is an American electronic music band from Denton, Texas. The music is composed by Mexican-born Alan Palomo, who is also known for his work with the band Ghosthustler, and as the solo artist VEGA. The project has been characterized as defining the 2000s music genre known as chillwave. The band's debut studio album, Psychic Chasms, was released in October 2009 to favorable reviews. Rolling Stone named Neon Indian one of the best new bands of 2010. Their second studio album, Era Extraña, was released in September 2011, followed by Vega Intl. Night School in October 2015.

On December 30, 2014, Palomo announced via his Instagram account that he was working on a new album, slated to be released sometime in 2015. the idea of Vega is intended to be really just dance music. Just true, one-speed?—?a clean, solid version of poppy, dance electronic music. It’s gonna have more groovy bass lines, more straightforward drums."

On May 26, 2015, the single "Annie" was released. On August 13, 2015, Palomo revealed that the band's third studio album would be titled Vega Intl. Night School, which was released on October 16. At the same time, he also released "Slumlord", the second single off that album. Third single "The Glitzy Hive" was released on October 8. In March 2016, Downtown Music Publishing and indie label Mom + Pop Music announced a joint publishing venture. The first signing as part of the new partnership was a publishing deal with Neon Indian. In an April 2016 interview, Palomo said, "If Neon Indian were to continue at all, it would have to undergo some aesthetic overhaul to remain interesting to me", and that his immediate focus after touring behind Vega Intl. Night School would be filmmaking.

In March 2017, Palomo appeared in director Terrence Malick's film Song to Song, opposite Rooney Mara. In 2017, Palomo composed the score for the science fiction film Everything Beautiful is Far Away. On November 14, 2019, the single "Toyota Man" was released, marking Neon Indian's first release of new music in four years. The lyrics of the song are in Spanish.

When performing, Palomo is joined on stage by a live band, which originally consisted of Jason Faries (drums), Leanne Macomber (keyboard, vocals) and Lars Larsen (live visuals). Ronald Gierhart played guitar and sang in the live group prior to 2011, leaving to finish college and begin a solo project called Ronnie Heart.

Looking for the cheapest concert tickets for the show of Neon Indian Tour 2024? If yes, then welcome to our portal offering a wide choice of either cheap of VIP tickets. Furthermore, we guarantee that here, you will definitely find so desired tickets for the performance of the Neon Indian 2023 Tour dates you adore.

The show of Neon Indian is worth seeing. You won’t regret because this talented person will gift you unforgettable emotions, help you forget about all problems and allow you to jump into the fantastic world of music for only one evening.

The primary target of our service is to offer Neon Indian tour tickets for the show of your favorite singer at the most affordable price. You may be sure that choosing our ticket service, you will not overpay and get the entrance ticket for the incredible performance, you were waiting for so long. We know everything about the way how a professional ticket service should work. So, with us, you’ll get the lowest Neon Indian ticket prices and the best places for the show.