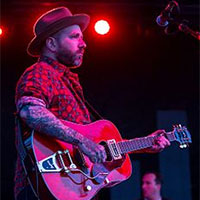 City And Colour will be performing an event in the next dates is right in your area. Buy tickets for your favorite performer or group and you will be able to visit his show already tomorrow!

Share with friends:
Updated: 05-24-2022
Dallas Michael John Albert Green is a Canadian musician and singer-songwriter who records under the name City and Colour. He is also known for his contributions as a singer, rhythm guitarist and songwriter for the post-hardcore band Alexisonfire. In 2005, he debuted his first full-length album, Sometimes, which achieved platinum certification in 2006. City and Colour began performing in small intimate venues between Alexisonfire tours. The name City and Colour comes from his own name: Dallas, a city, and Green, a colour. His reasoning for the name was that he felt uneasy "putting the album out under the name Dallas Green".

In September 2018, City and Colour announced the release of a new compilation album of live songs recorded during Dallas' 2017 "An Evening with City and Colour Solo Canadian tour", to be released digitally on October 5, 2018, and physically on November 23, 2018, via Still Records, a new record company set up by Dallas himself. Three tracks from the album were released digitally on September 21, 2018, "Casey's Song", "Sensible Heart" and "As Much as I Ever Could". A further three tracks were released a week later on September 21, 2018, "The Girl", "O'Sister" and "Lover Come Back".

In April 2019, City and Colour was the opening act for Alice in Chains' Canadian tour and other three U.S. concerts in support of their album Rainier Fog. Green is a longtime fan of the band and has cited them as one of his early influences. He joined them on stage for a rendition of their song "Nutshell" (a song that Green would often cover) during their concerts at the Budweiser Gardens in London, Ontario on April 23, 2019, and at the FirstOntario Concert Hall in Hamilton on April 24, 2019. He also sang "Got Me Wrong" with the band on April 25 in Rama, on April 27 in Montreal, and on April 28 in Quebec. Alice in Chains' guitarist and vocalist Jerry Cantrell gave one of his guitars to Green after they performed together at the MTELUS in Montreal on April 27, 2019. Green has stated that Cantrell made him fall in love with playing a guitar.

On June 3, 2019, the band debuted their first new song in four years called "Astronaut" and also announced a 22-date North American tour starting in October 2019. A further single called "Strangers" was released on June 21. On August 15, 2019, the band's album A Pill for Loneliness was announced and at midnight on August 16, a third song, "Living in Lightning", was also released as a single. Green said in a statement about the album, "I wrote a lot of dark songs and wrapped them in the most beautiful sounds we could find, there are personal connotations, but they're also relatable. I'm thankful for the opportunity to create." The album was released on October 4, 2019. In January 2020, the album received a Juno Award nomination for the Adult Alternative Album of the Year.

The show of City And Colour is worth seeing. You won’t regret because this talented person will gift you unforgettable emotions, help you forget about all problems and allow you to jump into the fantastic world of music for only one evening.

The primary target of our service is to offer City And Colour tour tickets for the show of your favorite singer at the most affordable price. You may be sure that choosing our ticket service, you will not overpay and get the entrance ticket for the incredible performance, you were waiting for so long. We know everything about the way how a professional ticket service should work. So, with us, you’ll get the lowest City And Colour ticket prices and the best places for the show.