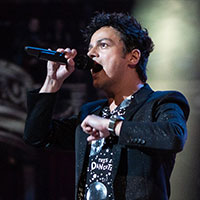 Jamie Cullum will be performing an event in the next dates is right in your area. Buy tickets for your favorite performer or group and you will be able to visit his show already tomorrow!

Share with friends:
Updated: 01-27-2023
Jamie Cullum is an English jazz-pop singer-songwriter and radio presenter. Although primarily a vocalist and pianist, he also accompanies himself on other instruments, including guitar and drums. Since April 2010, he has presented a weekly evening jazz show on BBC Radio 2.

In February 2012, Germany picked Roman Lob with "Standing Still", a composition by Cullum alongside Steve Robson and Wayne Hector, as their entry for the Eurovision Song Contest. In October 2014, Cullum appeared in a comedy sketch with Jimmy Carr and Daisy Lowe, which was made for Channel 4's The Feeling Nuts Comedy Night to raise awareness of testicular cancer. On 30 April 2016 Cullum played at The White House in Washington, D.C., as part of the International Jazz Day Global Concert. In January 2017, Cullum appeared as a member of the house band in ITV's The Halcyon.

Jamie Cullum's album Momentum was released on 20 May 2013. In conjunction with the album, he performed six intimate gigs across Europe; the first was in London. In an interview with NBHAP Cullum told that "Momentum" is about the crossover period from being a young man while having one foot in the adult world, and about the balance of childish fantasies with grand and epic responsibilities.

Interlude is an album consisting of jazz covers, released on 6 October 2014. Recorded with producer Benedic Lamdin of big band Nostalgia 77, and recorded in one take, the album was influenced by Cullum's BBC Radio 2 weekly jazz show. The duets on the album include two acts for which Cullum's radio show acted as a springboard for mainstream success: Laura Mvula featured on the track "Good Morning Heartache", and Gregory Porter on the lead single "Don't Let Me Be Misunderstood". Available in standard and deluxe versions, the latter including a DVD of Cullum's full performance at Jazz à Vienne, and an exclusive photo booklet containing tour and studio pictures. To celebrate the launch of his first pure jazz album, Cullum played at several jazz clubs, including Blue Note Jazz Club in New York, and London's Ronnie Scott's.

In February 2017 Cullum announced he was working on his next studio album Taller, following the release of its first single "Work of Art" on 17 February. The album's title track was released as a single on 3 May 2019. Ahead of the album release, two additional songs were made available on streaming services: "Drink" on 8 May and "The Age of Anxiety" on 31 May. The single "Work of Art" was removed from the standard edition of the album and moved to the deluxe edition. The album was released, on 7 June 2019, to positive reviews.

The British Jazz Awards recognised Cullum's growing success by awarding him the "Rising Star" award, at the 2003 ceremony in July. At the 2004 BRIT Awards, Cullum was nominated in the "British Breakthrough Act" category. He performed live in the ceremony at Earl's Court, a duet with Katie Melua of The Cure's "The Lovecats". In the 2005 BRIT Awards, Cullum was nominated for two awards: "Best Male Artist" and "Best Live Act". In 2005 Cullum was nominated for a Grammy while taking BBC Radio 2 "Artist of the Year" honours at the BBC Jazz Awards (as voted by listeners of Radio 2). In 2007 Cullum won the Ronnie Scott's Jazz Club Award for "Best British Male". He was also nominated for a Golden Globe Award for Best Original Song for his composition Gran Torino for the Clint Eastwood film Gran Torino. At the Jazz FM awards 2013, he was a nominee for UK Jazz Artist of the Year.

Looking for the cheapest concert tickets for the show of Jamie Cullum Tour 2024? If yes, then welcome to our portal offering a wide choice of either cheap of VIP tickets. Furthermore, we guarantee that here, you will definitely find so desired tickets for the performance of the Jamie Cullum 2023 Tour dates you adore.

The show of Jamie Cullum is worth seeing. You won’t regret because this talented person will gift you unforgettable emotions, help you forget about all problems and allow you to jump into the fantastic world of music for only one evening.

The primary target of our service is to offer Jamie Cullum tour tickets for the show of your favorite singer at the most affordable price. You may be sure that choosing our ticket service, you will not overpay and get the entrance ticket for the incredible performance, you were waiting for so long. We know everything about the way how a professional ticket service should work. So, with us, you’ll get the lowest Jamie Cullum ticket prices and the best places for the show.