The Book of Mormon Tickets 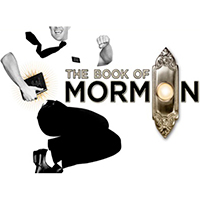 The Book of Mormon will be performing an event in the next dates is right in your area. Buy tickets for your favorite performer or group and you will be able to visit his show already tomorrow!

Share with friends:
Updated: 05-25-2022
The Book of Mormon is a musical comedy about two young Mormon missionaries who travel to Uganda to preach the Mormon religion. First staged in 2011, the play makes light of various Mormon beliefs and practices, but ultimately endorses the positive power of love and service. The script, lyrics, and music were written by Trey Parker, Robert Lopez, and Matt Stone. Parker and Stone were best known for creating the animated comedy South Park; Lopez had co-written the music for the musical Avenue Q.

The Book of Mormon follows two Mormon missionaries as they attempt to share their scriptures with the inhabitants of a remote Ugandan village. The earnest young men are challenged by the lack of interest of the locals, who are preoccupied with more pressing troubles such as AIDS, famine, and oppression from local warlords.

In 2003, after Parker and Stone saw Avenue Q, they met with Lopez and began developing the musical, meeting sporadically for several years. Parker and Stone grew up in Colorado, and references to The Church of Jesus Christ of Latter-day Saints had been commonplace in their previous works. For research, the trio took a trip to Salt Lake City to meet with current and former Mormon missionaries. Beginning in 2008, developmental workshops were staged. The show's producers, Scott Rudin and Anne Garefino, opted to open the show directly on Broadway.

The show opened on Broadway in March 2011, after nearly seven years of development. The LDS Church issued a polite, measured response to the musical, and purchased advertising space in its playbill in later runs. The Book of Mormon garnered overwhelmingly positive critical responses, and set records in ticket sales for the Eugene O'Neill Theatre. The show was awarded nine Tony Awards, one of which was for Best Musical, and a Grammy Award for Best Musical Theater Album. The original Broadway cast recording became the highest-charting Broadway cast album in over four decades, reaching number three on the Billboard charts. In 2013, the musical premiered in the West End, followed by two US national tours. A production in Melbourne and the first non-English version, in Stockholm, both opened in January 2017. Productions in Oslo and Copenhagen followed.

The Book of Mormon has grossed over $500 million, making it one of the most successful musicals of all time.

The Book of Mormon official - https://book-of-mormon-tour.com/

The show of The Book of Mormon is worth seeing. You won’t regret because this talented person will gift you unforgettable emotions, help you forget about all problems and allow you to jump into the fantastic world of music for only one evening.

The primary target of our service is to offer The Book of Mormon tour tickets for the show of your favorite singer at the most affordable price. You may be sure that choosing our ticket service, you will not overpay and get the entrance ticket for the incredible performance, you were waiting for so long. We know everything about the way how a professional ticket service should work. So, with us, you’ll get the lowest The Book of Mormon ticket prices and the best places for the show.