New Kids on the Block Tickets 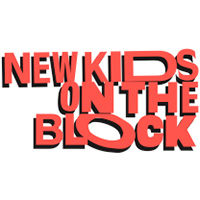 New Kids on the Block will be performing an event in the next dates is right in your area. Buy tickets for your favorite performer or group and you will be able to visit his show already tomorrow!

Share with friends:
Updated: 02-09-2023
New Kids on the Block is an American boy band from Boston, Massachusetts. The band currently consists of brothers Jordan and Jonathan Knight, Joey McIntyre, Donnie Wahlberg, and Danny Wood. New Kids on the Block enjoyed success in the late 1980s and early 1990s and have sold more than 80 million records worldwide. They won two American Music Awards in 1990 for Favorite Pop/Rock Band, Duo, or Group and Favorite Pop/Rock Album. The group disbanded in 1994, and reunited in 2007.

After secretly reuniting in 2007 and recording a new record, the group released that new album and embarked on a concert tour in 2008. The album, entitled The Block, was released on September 2, 2008. New Kids on the Block was listed as number 16 on Rolling Stone's Top 25 Teen Idol Breakout Moments. The group was on tour with the Backstreet Boys in 2011–12 as NKOTBSB. This collaboration first performed live together on November 21, 2010 at the American Music Awards on ABC and again on 2011 New Year's on ABC's Dick Clark/Ryan Seacrest show. The group received a star on the Hollywood Walk of Fame on October 9, 2014. They are still touring as of 2017 with their Total Package Tour.

In October 2018, New Kids announced plans to tour alongside 90s stars like Salt-N-Pepa, Naughty by Nature, Debbie Gibson and Tiffany for their MixTape Tour. The trek is expected to kick off May 2, 2019 in Cincinnati, Ohio. It will run through July, concluding on the 14th in Hollywood, Florida. On December 13, 2018, New Kids announced they would be celebrating New Year's in Times Square. Performing at Dick Clark's New Year's Rockin' Eve 2019.

The show of New Kids on the Block is worth seeing. You won’t regret because this talented person will gift you unforgettable emotions, help you forget about all problems and allow you to jump into the fantastic world of music for only one evening.

The primary target of our service is to offer New Kids on the Block tour tickets for the show of your favorite singer at the most affordable price. You may be sure that choosing our ticket service, you will not overpay and get the entrance ticket for the incredible performance, you were waiting for so long. We know everything about the way how a professional ticket service should work. So, with us, you’ll get the lowest New Kids on the Block ticket prices and the best places for the show.