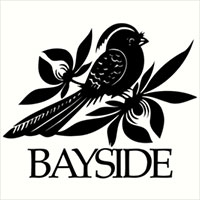 Bayside will be performing an event in the next dates is right in your area. Buy tickets for your favorite performer or group and you will be able to visit his show already tomorrow!

Share with friends:
Updated: 01-25-2022
Bayside is an American rock band from the Bayside, Queens neighborhood of New York City, formed in 2000 by lead vocalist Anthony Raneri. The group also consists of lead guitarist Jack O'Shea, bassist Nick Ghanbarian, and drummer Chris Guglielmo. Since their formation, the group has released eight full-length albums, with their debut, Sirens and Condolences, in 2004, and the release of 2005's follow-up, Bayside, launching the band into mainstream success. The band released six more albums: The Walking Wounded (2007), Shudder (2008), Killing Time (2011),Cult (2014), Vacancy (2016) and Interrobang, (2019).

Bayside was formed by Anthony Raneri and Mike Kozak in October 2000 in Queens, New York City. The band got its name when on their way to a New Found Glory show on Long Island, with the intention of giving New Found Glory a demo CD, and they were trying to think of a name to write on the CD. They passed the Bayside train station, and decided to write "Bayside" on the CD simply as a name for New Found Glory, but the name became permanent. The group self-released a 5-song demo and signed to Dying Wish Records to issue their first release, Long Stories Short EP in 2001. In 2003 the band released a split EP with Name Taken, entitled Bayside/Name Taken, with Dying Wish Records. Later in 2003, Bayside signed to Victory Records, where the band resided for the next six years. Bayside's debut full-length album, Sirens and Condolences, was released on January 27, 2004, through Victory Records.

On August 19, 2016, Bayside released their seventh studio album entitled Vacancy through Hopeless Records. The band embarked on a US tour to support the album through August and September 2016 and have announced Australian tour dates for November 2016. The album received favorable reviews from fans and critics. On August 16th, 2018, the band announced they would be making another acoustic album, titled Acoustic Volume 2, updated with songs from newer albums. The album includes a new song, "It Don't Exist", and a music video was released for it on the day of the announcement. The album was released on September 28th, 2018.

On August 20th, the band released a new single, titled 'Prayers.' On September 20th, The band announced their 8th studio album, Interrobang, and released the title track along with a music video. The albums release date was also set as October 4th, only 2 weeks from this announcement. A week later, A tour in support of the new album was announced along with a battle of the bands submission and voting based on the bands website. The Contest was meant as a way for the band to support local unsigned bands and give them a chance to perform in front of a large crowd. Each concert would feature a local band as an opener.

Looking for the cheapest concert tickets for the show of Bayside Tour 2023? If yes, then welcome to our portal offering a wide choice of either cheap of VIP tickets. Furthermore, we guarantee that here, you will definitely find so desired tickets for the performance of the Bayside 2022 Tour dates you adore.

The show of Bayside is worth seeing. You won’t regret because this talented person will gift you unforgettable emotions, help you forget about all problems and allow you to jump into the fantastic world of music for only one evening.

The primary target of our service is to offer Bayside tour tickets for the show of your favorite singer at the most affordable price. You may be sure that choosing our ticket service, you will not overpay and get the entrance ticket for the incredible performance, you were waiting for so long. We know everything about the way how a professional ticket service should work. So, with us, you’ll get the lowest Bayside ticket prices and the best places for the show.