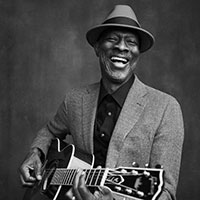 Keb Mo will be performing an event in the next dates is right in your area. Buy tickets for your favorite performer or group and you will be able to visit his show already tomorrow!

Share with friends:
Updated: 01-19-2022
Kevin Roosevelt Moore known as Keb' Mo', is an American blues musician and five-time Grammy Award winner. He is a singer, guitarist, and songwriter, living in Nashville, Tennessee. He has been described as "a living link to the seminal Delta blues that travelled up the Mississippi River and across the expanse of America". His post-modern blues style is influenced by many eras and genres, including folk, rock, jazz, pop and country. The moniker "Keb Mo" was coined by his original drummer, Quentin Dennard, and picked up by his record label as a "street talk" abbreviation of his given name.

Keb' Mo' started his musical career playing the steel drums and upright bass in a calypso band. He moved on to play in a variety of blues and backup bands throughout the 1970s and 1980s. He first started recording in the early 1970s with Jefferson Airplane violinist Papa John Creach through an R&B group. Creach hired him when Moore was 21 years old; Moore appeared on four of Creach's albums: Filthy!, Playing My Fiddle for You, I'm the Fiddle Man and Rock Father. Keb' Mo's first gold record was received for a song, "Git Fiddler", which he co-wrote with Papa John on Jefferson Starship's Red Octopus. Red Octopus hit number one on the Billboard 200 in 1975.

Moore was also a staff writer for A&M Records, and arranged demos for Almo - Irving music. Keb' Mo's debut, Rainmaker, was released on Chocolate City Records, a subsidiary of Casablanca Records, in 1980. He was further immersed in the blues with his long stint in the Whodunit Band, headed by Bobby "Blue" Bland producer Monk Higgins. Moore jammed with Albert Collins and Big Joe Turner and emerged as an inheritor of a guarded tradition and as a genuine original.

In June 2019 Keb' Mo' released a studio album "Oklahoma" with guest contributions from Rosanne Cash. Jaci Velasquez, Robert Randolph, and Taj Mahal, with a duet with Robbie Brooks Moore (his wife). Keb' Mo' played the Glastonbury Festival in June 2019 followed by UK and European dates in July 2019. Keb' Mo' performed at the 2019 Musicians Hall of Fame and Museum concert and induction ceremony. Keb' Mo' won the Grammy Award for "Best Americana Album" in 2020 for Oklahoma. He was one of the headliners at the 2020 Mahindra Blues Festival in Mumbai, India.

He has been supportive of charity Playing For Change since its inception and recently appeared in a video with Keith Richards' singing Bob Marley's "Get Up, Stand Up". He appeared on two tracks from the Playing For Change: Songs Around The World that was released on June 17. The album had over 180 musicians from 31 countries, including Keith Richards, Sara Bareilles, David Hidalgo, Cesar Rosas, and Taj Mahal. He donates 5% of BLUESAmericana to the charity.

In late 2015 he performed at a special concert hosted by Barack Obama called 'A Celebration of American Creativity: In Performance at the White House". It was shot and filmed in the East Room of the White House. Other performers included Smokey Robinson, James Taylor, Buddy Guy, Queen Latifah, Usher, Trombone Shorty, MC Lyte, Audra McDonald, Esperanza Spalding, Brian Stokes Mitchell and Carol Burnett. It commemorated the 50th anniversary of the founding of Lyndon B. Johnson's National Foundation on the Arts through the Humanities Act. Keb' Mo' released a live album, Keb' Mo' Live - That Hot Pink Blues Album on April 15, on Kind of Blue Music/RED Distribution.

Keb' Mo' partnered up with Taj Mahal to release a joint album, TajMo, on May 5, 2017. The album has guest appearances by Bonnie Raitt, Joe Walsh, Sheila E., and Lizz Wright, and has six original compositions and five covers, from artists and bands like John Mayer and The Who. The album won the 2018 Grammy for Best Contemporary Blues Album.

Looking for the cheapest concert tickets for the show of Keb Mo Tour 2023? If yes, then welcome to our portal offering a wide choice of either cheap of VIP tickets. Furthermore, we guarantee that here, you will definitely find so desired tickets for the performance of the Keb Mo 2022 Tour dates you adore.

The show of Keb Mo is worth seeing. You won’t regret because this talented person will gift you unforgettable emotions, help you forget about all problems and allow you to jump into the fantastic world of music for only one evening.

The primary target of our service is to offer Keb Mo tour tickets for the show of your favorite singer at the most affordable price. You may be sure that choosing our ticket service, you will not overpay and get the entrance ticket for the incredible performance, you were waiting for so long. We know everything about the way how a professional ticket service should work. So, with us, you’ll get the lowest Keb Mo ticket prices and the best places for the show.