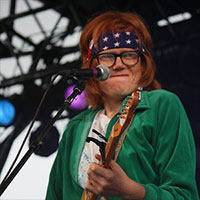 Brett Dennen will be performing an event in the next dates is right in your area. Buy tickets for your favorite performer or group and you will be able to visit his show already tomorrow!

Share with friends:
Updated: 02-09-2023
Brett Michael Dennen is an American folk/pop singer and songwriter from Central California. His sixth studio album, Por Favor, was released in May 2016. Dennen has been a part of The Mosaic Project, a San Francisco Bay Area-based nonprofit organization, since its inception. In 2004, Dennen released his debut, self-titled album, Brett Dennen on an indie label, Three Angels and A Saint Records, produced by Dennen & Leslie Merical. Dennen eventually signed a record deal with Dualtone Records. His second album, So Much More, includes the singles "Ain't No Reason", "She's Mine" and "Darlin' Do Not Fear". Dennen also contributed a cover of "Private Life" to the 2006 tribute album Drink To Bones That Turn To Dust: A Toast To Oingo Boingo. In an interview with American Songwriter magazine, Dennen acknowledged Paul Simon's significant influence on his music as well as commenting that Paul Simon's Graceland was one of his favorite albums. Dennen opened for John Mayer on his tour in 2008.

On October 9, 2009, Dennen appeared on The Late Show with David Letterman. In 2010, Dennen played at the Oulipo Ballroom in Kentucky. He played a mixture of Paul Simon covers along with unreleased tracks from his upcoming album. His fourth album, Loverboy, was released on April 12, 2011. In 2009, Dennen's song "She's Mine" was featured on the soundtrack for the movie According to Greta; in 2010, Dennen's song "Darlin' Do Not Fear" was featured on the soundtrack for the TV show Parenthood.

Dennen's fifth album, Smoke and Mirrors was released on October 22, 2013, along with its first single, "Wild Child." On October 24, "Sweet Persuasion" was featured on the TV show Parenthood. "Comeback Kid (That's My Dog)" is the theme song on the NBC comedy About A Boy. The song was also used in the series finale of Wizards of Waverly Place. On March 13, 2014, he appeared on episode 67 of Live From Daryl's House, performing "Only Want You", "Wild Child", "Right As Rain", "When We Were Young", "What's Gunna Happen To Us", and "Don't Mess With Karma" with Daryl Hall and his house band. In 2016, Dennen released his sixth studio album, Por Favor. In January 2018, Dennen released a new single, "Already Gone." That same year, he released two EPs "simply to change it up." The EP Here's Looking At You Kid?, a song that he says is about "life," was originally inspired by his loyal fans over the years, but began to include his personal speculation about what fatherhood might be like.

Looking for the cheapest concert tickets for the show of Brett Dennen Tour 2024? If yes, then welcome to our portal offering a wide choice of either cheap of VIP tickets. Furthermore, we guarantee that here, you will definitely find so desired tickets for the performance of the Brett Dennen 2023 Tour dates you adore.

The show of Brett Dennen is worth seeing. You won’t regret because this talented person will gift you unforgettable emotions, help you forget about all problems and allow you to jump into the fantastic world of music for only one evening.

The primary target of our service is to offer Brett Dennen tour tickets for the show of your favorite singer at the most affordable price. You may be sure that choosing our ticket service, you will not overpay and get the entrance ticket for the incredible performance, you were waiting for so long. We know everything about the way how a professional ticket service should work. So, with us, you’ll get the lowest Brett Dennen ticket prices and the best places for the show.