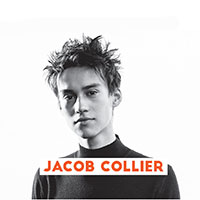 Jacob Collier will be performing an event in the next dates is right in your area. Buy tickets for your favorite performer or group and you will be able to visit his show already tomorrow!

Share with friends:
Updated: 09-28-2022
Jacob Collier is an English singer, arranger, composer, producer, and multi-instrumentalist based in London, England. In 2012, his split-screen video covers of popular songs, such as Stevie Wonder's "Don't You Worry 'bout a Thing", began to go viral on YouTube.

Collier's style fuses elements of jazz, a cappella, groove, folk, electronic music, classical music, gospel, soul and improvisation, and often features extreme use of reharmonisation. In 2014, Collier signed to Quincy Jones' management company and began working on his one-man, audio-visual live performance vehicle, designed and built at the Massachusetts Institute of Technology. In 2016, Collier released his debut album, In My Room, which was entirely self-recorded, arranged, performed and produced in the small back room of his family home in Finchley, north London. In 2017, Collier was awarded two Grammys for his arrangements of "Flintstones" and "You And I", both from the album.

The first single of the Djesse project, "With The Love in My Heart", was released on 2 November. Two further singles, "Ocean Wide, Canyon Deep" and "All Night Long", were released in late November. Djesse Vol. 1 was released in full on 7 December. The volume features collaborations with Voces8, Laura Mvula, Hamid El Kasri, Take 6, and his mother, Suzie Collier. The Metropole Orkest featured heavily throughout the album, appearing on every track in addition to Collier's vocals and various instruments. Collier produced, arranged and orchestrated the music himself. In January 2019, Collier began the Djesse World Tour. No longer a one-man-show, Collier is now backed by a band, including the Portuguese multi-instrumentalist Maro, bassist Robin Mullarkey, and drummer Christian Euman.

On 20 November 2019, Djesse Vol. 1 and Vol. 2 each garnered a nomination for the 62nd Annual Grammy Awards, for "All Night Long" (feat. Take 6) and "Moon River" respectively. The nominated tracks both won their respective categories at the awards. In November 2019, Collier announced the first single from Djesse Vol. 3, "Time Alone With You" in collaboration with Daniel Caesar, which was released on 29 November 2019. The video for the song premiered on YouTube on 5 December.

Looking for the cheapest concert tickets for the show of Jacob Collier Tour 2023? If yes, then welcome to our portal offering a wide choice of either cheap of VIP tickets. Furthermore, we guarantee that here, you will definitely find so desired tickets for the performance of the Jacob Collier 2022 Tour dates you adore.

The show of Jacob Collier is worth seeing. You won’t regret because this talented person will gift you unforgettable emotions, help you forget about all problems and allow you to jump into the fantastic world of music for only one evening.

The primary target of our service is to offer Jacob Collier tour tickets for the show of your favorite singer at the most affordable price. You may be sure that choosing our ticket service, you will not overpay and get the entrance ticket for the incredible performance, you were waiting for so long. We know everything about the way how a professional ticket service should work. So, with us, you’ll get the lowest Jacob Collier ticket prices and the best places for the show.