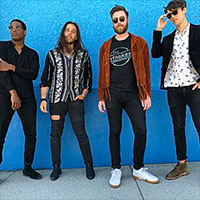 Kasador will be performing an event in the next dates is right in your area. Buy tickets for your favorite performer or group and you will be able to visit his show already tomorrow!

Share with friends:
Updated: 08-10-2022
Kasador is a Canadian indie rock/pop band originating from Kingston, Ontario. The four-piece band was formed in 2012, and was known as the Will Hunter Band until changing the group's name in early 2015. Members as of March 2019 are Will Hunter, Cam Wyatt, Boris Baker, and Stephen Abudofuor.

Lead vocalist and guitarist Will Hunter started his musical career playing solo acoustic sets in the Kingston area while he was a student at Queen's University. He sought out other musicians and founded the band in 2012 with original drummer and bassist Don Pineapple and Colin Simonds. Fellow Queen's students Boris Baker (bass) and Cam Wyatt (lead guitar) joined what was then known as the Will Hunter Band; other musicians also performed. The group initially performed at venues in and around Queen's University.

In August 2014, they released a five-song EP titled Last Summer, recorded at Bathouse Recording Studio. The band started touring through Southern and Eastern Ontario, and was slotted as the opening act for headliners such as The Stringers.

On October 4, 2019, Kasador released their first full album, entitled Brood & Bloom. The 12-track album was recorded during 2017 and 2018 at Bathouse Recording Studio, during which time the band's composition underwent several changes, with Babcock and Laferrière leaving the band, and new drummer Adubofuor joining. The band also went from five to four members. The album tracks include performances by both Laferrière and Babcock, including a track (Pinched Nerve) where Babcock sings lead vocals. Lead vocals were shared between Will Hunter and Cameron Wyatt. The writing credits for all songs are attributed to "Kasador" rather than to individuals. Production was by Graham Walsh (who also played keyboards on five songs), Rob Baker and Gordon Sinclair; Nyles Spencer also produced three songs, and engineered the album.

The title single was released prior to the album, and reached #27 on the Canadian alternative radio chart and #37 on the Canadian rock radio chart. According to the Kingston Herald, this meant "Kasador was the only independent band in the top 40 at the time." A Journal of Musical Things published an extensive review of the album, saying, "This album has substance. It has weight. And it’s incredible." The review went on to discuss each track in the album, and stated that the band "is standing firmly on the edge of something massive".

Looking for the cheapest concert tickets for the show of Kasador Tour 2023? If yes, then welcome to our portal offering a wide choice of either cheap of VIP tickets. Furthermore, we guarantee that here, you will definitely find so desired tickets for the performance of the Kasador 2022 Tour dates you adore.

The show of Kasador is worth seeing. You won’t regret because this talented person will gift you unforgettable emotions, help you forget about all problems and allow you to jump into the fantastic world of music for only one evening.

The primary target of our service is to offer Kasador tour tickets for the show of your favorite singer at the most affordable price. You may be sure that choosing our ticket service, you will not overpay and get the entrance ticket for the incredible performance, you were waiting for so long. We know everything about the way how a professional ticket service should work. So, with us, you’ll get the lowest Kasador ticket prices and the best places for the show.