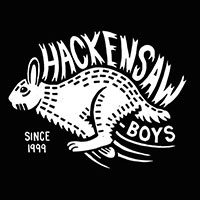 The Hackensaw Boys will be performing an event in the next dates is right in your area. Buy tickets for your favorite performer or group and you will be able to visit his show already tomorrow!

Share with friends:
Updated: 08-10-2022
The Hackensaw Boys are a string band based in central Virginia that formed in 1999. The band has drawn on many musical influences and are  known best for rowdy, energetic live shows." They have performed at Bonnaroo, Lockn', FloydFest, and the All Good Music Festival. The band tours continuously and claims twenty or more current and former members. The current four-piece lineup contains only one original member, David Sickmen, who rejoined the group in 2012 (after quitting in 2005). In April 2016 the band released Charismo on Free Dirt Records, their first studio album in almost a decade — which was produced by Larry Campbell.

In January of 2018, the band saw the exit of Ferd Moyse and Brian Gorby, to focus on family and other musical projects. Face to face with the possibility and fear of having to hang it all up, David recruited long-time friend and former band-mate from a previous project, Beau Dodson for charismo, drums/percussion and vocals. Chris Stevens, who had sat in on bass for Hackensaw in the past, was brought on full time, adding bass to the line-up once again after a stint without. To round out the new line-up, Chris recommended his astonishingly talent band-mate and pal Caleb Powers for fiddle and vocals. In December of 2018 the reformed team entered the studio to record a five song EP, due to be released in the spring of 2019.

As former member and founder Bullington puts it "we can play an old folks home in the afternoon and then play for a bunch of punk rockers, or whoever else might still be up and ready for a good time, or some music at midnight. They all seem to enjoy it equally." Fellow founder Sickmen claims "the original intent of the band . . was to bring old-time Appalachian country punk rock." Band member Jesse "Baby J." Fiske questions the importance of assigning a specific style: "We're not really an old-time band either. As long as we speak to someone, it doesn't really matter what the genre is." The group largely performs original material, with a traditional feel. As former member Shawn Galbraith, banjo player, puts it: "We play original material provided by different members of the band. There are some traditional elements to our sound for sure, but we always try to maintain some uniqueness." "I don't think many people would call us a traditional oldtime band," states bandleader David Sickmen: "I'd say our songs are about ninety percent originals. Then we have some old-time songs we play in our own way."

The show of The Hackensaw Boys is worth seeing. You won’t regret because this talented person will gift you unforgettable emotions, help you forget about all problems and allow you to jump into the fantastic world of music for only one evening.

The primary target of our service is to offer The Hackensaw Boys tour tickets for the show of your favorite singer at the most affordable price. You may be sure that choosing our ticket service, you will not overpay and get the entrance ticket for the incredible performance, you were waiting for so long. We know everything about the way how a professional ticket service should work. So, with us, you’ll get the lowest The Hackensaw Boys ticket prices and the best places for the show.