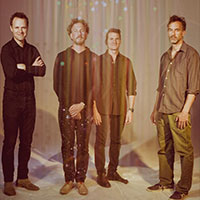 Guster will be performing an event in the next dates is right in your area. Buy tickets for your favorite performer or group and you will be able to visit his show already tomorrow!

Share with friends:
Updated: 01-27-2022
Guster is an American alternative rock band from Boston, Massachusetts, United States. Founding members Adam Gardner, Ryan Miller, and Brian Rosenworcel began practice sessions while attending Tufts University in Medford, Massachusetts, and formed the band in 1991. The members met during the freshmen Wilderness Orientation program in August of that year, playing publicly together as a trio two months later at the Midnight Cafe coffee house set in the common area of the Lewis Hall dormitory. While attending Tufts, the band lived at 139 College Avenue in Somerville, Massachusetts.

The band stayed "underground" for its first two full-length albums, Parachute (1994) and Goldfly (1997), but broke into the musical mainstream in 1999 with its third studio album Lost and Gone Forever, featuring the single "Fa Fa", which made it onto the Adult Top 40. The band enjoyed moderate success on the charts with Keep It Together, its fourth album, with two singles in the Adult Top 40 ("Careful" and "Amsterdam"). Joe Pisapia joined the official lineup for Keep It Together and its follow-up, Ganging Up on the Sun, which peaked at 25 on the Billboard 200. A variety of television shows and movies have featured the band's music, including Martian Child, which featured their song "Satellite"; Disturbia; Wedding Crashers; Life as a House, which makes several allusions to the band throughout the film; The O.C.; and one of the band's songs was used in an ad for The Weather Channel. The band earned its first gold record in 2018 for its single "Satellite".

Guster's tours were originally local, but began to spread as the band gained popularity. In 1999, Guster gave its first performance in Canada, followed by a 2004 tour in Britain that had four shows in London and one in Manchester. Guster maintains a liberal taping policy and has a very dedicated and active taping community. Despite this policy, the band has released several live shows via iTunes.

Guster is often recognized for its choice of instruments during their earlier years: two members playing acoustic guitars and one member playing various percussion instruments. Brian Rosenworcel, the band's percussionist (affectionately dubbed the Thundergod by fans), added to Guster's unique sound with a combination of bongos, cymbals, and other drums, playing live shows using only his bare hands. While Miller played rhythm parts, Gardner would often play a bass line on his guitar. Guster's sound is recognized for its vocal harmonies, with both Miller and Gardner singing lead vocals on different songs; in songs such as "What You Wish For" and "Happier", the two members sing different lyrics simultaneously. While Guster's studio albums included more instrumental variety (e.g. violin, bass, drum kit), its live shows generally retained the same lineup until tours supporting its album Lost and Gone Forever, in which the band diversified by playing different instruments on some songs. At this time, Rosenworcel began introducing a more traditional drum kit into the stage and studio performances in an effort to move away from bare-hand percussion.

Guster's live shows have a style of their own. For encores, the band has sometimes featured drummer Brian Rosenworcel, who is not known for his vocals, moving to the front microphone and singing humorous covers. These have ranged from Temple of the Dog's "Hunger Strike" to 4 Non Blondes' "What's Up?" to the theme song from the TV show Cheers ("Where Everybody Knows Your Name"). Other examples include: "Under the Bridge" by the Red Hot Chili Peppers, "Total Eclipse of the Heart" by Bonnie Tyler, "In the Air Tonight" by Phil Collins, and "Firework" by Katy Perry. Other traditions at live shows have been developed over the years. For example, at the end of "Airport Song", people in the crowd throw ping-pong balls at the stage, in reference to the studio recording where the audio of a table tennis game can be heard in the background.

The band's humor is noted by many fans. For laughs, the three original members of Guster opened a number of their own shows as the Peace Soldiers, three redneck-looking musicians. With the addition of Joe into the band, it has since opened for itself in costume as a jam band called Trippin' Balls. During a 2001 show (which was oddly enough opened by Joe Pisapia's band Joe, Marc's Brother) in Rochester, New York, the band started their show with an empty stage. The music to The Price Is Right played over the sound system, and a voice called each of the band members down from where they had hid themselves in the audience. Upon hearing their name, each member played the part of an enthusiastic game show contestant all the way to the stage. During a show in 2002 when Guster played with John Mayer and John Butler Trio in Memphis, Tennessee, the band danced around on stage with KFC buckets covering their heads while J.B.T. was playing their set. In 2019, during their third annual On the Ocean festival in Portland, Maine, the band advertised a free afterparty "headlined by the legendary EDM group, PIPPI". During the afterparty, PIPPI was revealed to be the band dressed in matching jumpers with Pippi Longstocking style wigs.

Looking for the cheapest concert tickets for the show of Guster Tour 2023? If yes, then welcome to our portal offering a wide choice of either cheap of VIP tickets. Furthermore, we guarantee that here, you will definitely find so desired tickets for the performance of the Guster 2022 Tour dates you adore.

The show of Guster is worth seeing. You won’t regret because this talented person will gift you unforgettable emotions, help you forget about all problems and allow you to jump into the fantastic world of music for only one evening.

The primary target of our service is to offer Guster tour tickets for the show of your favorite singer at the most affordable price. You may be sure that choosing our ticket service, you will not overpay and get the entrance ticket for the incredible performance, you were waiting for so long. We know everything about the way how a professional ticket service should work. So, with us, you’ll get the lowest Guster ticket prices and the best places for the show.