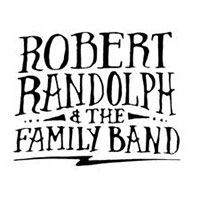 Robert Randolph and The Family Band will be performing an event in the next dates is right in your area. Buy tickets for your favorite performer or group and you will be able to visit his show already tomorrow!

Share with friends:
Updated: 01-19-2022
Robert Randolph and the Family Band is an American funk and soul band led by pedal steel guitarist Robert Randolph. NPR has described the band as one with an "irresistible rock 'n' roll swagger". Rolling Stone also went on to include Randolph upon their list of the 100 greatest guitarists of all time. The band has released six studio albums and has been Grammy nominated three times.

In 2002, they were hired by ABC to make the network's new NBA theme song. The song, "We Got Hoops", only appeared in three telecasts, though it was used throughout both the NBA and WNBA seasons during promotions for both leagues. In September 2003 Randolph was listed as No. 97 on Rolling Stone's 100 Greatest Guitarists of All Time list. Robert entered the list following Leigh Stephens and directly preceding Angus Young. In February 2004 Robert Randolph and the Family Band along with the band O.A.R. released a cover version of Led Zeppelin's "Fool in the Rain", which was made available for online purchase through iTunes. This version was played live with O.A.R. at their June 18, 2009 show at Charter One Pavilion in Chicago.

Their third album, Colorblind, was released October 10, 2006. The song "Ain't Nothing Wrong With That" was used in several commercials for NBC, and used in Katherine Jenkins and Mark Ballas' jive on Dancing with the Stars. In June 2008 the Discovery Channel used this same song in a popular promo entitled "It's All Good" for their summer lineup. The song "Thrill of It" was used throughout the 2007 college football season by ABC during their College Primetime games.

They worked with producer T-Bone Burnett on their fourth studio album We Walk This Road, released in 2010. They released the supposed first single from that album entitled "Get There" but this song did not appear on the album. The first official single from the album is "If I Had My Way." Their 2019 recording, Brighter Days, was chosen as a 'Favorite Blues Album' by AllMusic.

The show of Robert Randolph and The Family Band is worth seeing. You won’t regret because this talented person will gift you unforgettable emotions, help you forget about all problems and allow you to jump into the fantastic world of music for only one evening.

The primary target of our service is to offer Robert Randolph and The Family Band tour tickets for the show of your favorite singer at the most affordable price. You may be sure that choosing our ticket service, you will not overpay and get the entrance ticket for the incredible performance, you were waiting for so long. We know everything about the way how a professional ticket service should work. So, with us, you’ll get the lowest Robert Randolph and The Family Band ticket prices and the best places for the show.