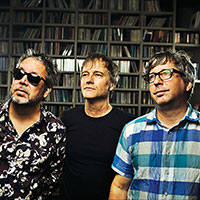 Fastball will be performing an event in the next dates is right in your area. Buy tickets for your favorite performer or group and you will be able to visit his show already tomorrow!

Share with friends:
Updated: 12-02-2021
Fastball is an American rock band that formed in Austin, Texas in 1995. The band originally called themselves "Magneto U.S.A." but changed their name after signing with Hollywood Records. In 1998, their album All the Pain Money Can Buy reached platinum sales within six months of its release, and stayed on the Billboard 200 chart for a year. In addition, the group has been nominated for two Grammy Awards – Best Rock Performance by a Duo or Group with Vocal for "The Way", and Best Long Form Music Video for their promotional video "The Way". They also received five The Austin Chronicle awards: 1998's Album of the Year, Best Video, Best Single/EP, Band of the Year, and 1995's Best Pop Band.

In 1995, Tony Scalzo, Miles Zuniga, and Joey Shuffield formed Fastball in Austin, Texas. Zuniga and Shuffield first played together in a band called Big Car. After a stint with another group called Wild Seeds, Shuffield introduced Zuniga to Scalzo, who had played in a band called the Goods in Orange County, California. The trio decided to form their own band, and began playing around the Austin area. When they first started out, the band tried out several names, such as Star 69, Magneto, Magneto USA, Ed Clark's Business Bible and Starchy, before finally deciding to adopt the name Fastball.

On April 14, 2009, Fastball released its fifth album, Little White Lies. The album was co-produced by Zuniga and experienced producer CJ Eiriksson, with mixing by Bob Clearmountain. Tony and Miles would work on separate solo projects in following years, with Miles' solo album "These Ghosts Have Bones" being released in September 2011 and Tony releasing "My Favorite Year" in February 2013. Both were successfully funded with the help of their respective Kickstarter campaigns. In April 2013, a new single titled "Love Comes in Waves" was released to digital outlets. The video premiered on YouTube on July 23, 2013.

On February 5, 2015, the band began recording a new album at The Bubble recording studio in Austin. In March, the band announced that "Love Comes in Waves" would be featured on the band's forthcoming album Step Into Light, which was released on May 19. A video for a second song from the album, "I Will Never Let You Down", was released in early March 2017. In mid-September 2017 the band played a living room concert at the home of Los Angeles-based comic Chet Wild following a nearly-year long Twitter campaign (#FastballAtChets). The concert raised $12,500 via Indiegogo to assist with Hurricane Harvey relief efforts. Several attendees at the concert took part in the filming of the video for "Best Friend" earlier that day, directed by Nigel Dick. In 2018 and 2019, the band debuted new songs "The Girl You Pretended to Be", "Help Machine" and "All Gone Fuzzy," from The Help Machine, their seventh album, which was released on October 18, 2019.

Looking for the cheapest concert tickets for the show of Fastball Tour 2022? If yes, then welcome to our portal offering a wide choice of either cheap of VIP tickets. Furthermore, we guarantee that here, you will definitely find so desired tickets for the performance of the Fastball 2021 Tour dates you adore.

The show of Fastball is worth seeing. You won’t regret because this talented person will gift you unforgettable emotions, help you forget about all problems and allow you to jump into the fantastic world of music for only one evening.

The primary target of our service is to offer Fastball tour tickets for the show of your favorite singer at the most affordable price. You may be sure that choosing our ticket service, you will not overpay and get the entrance ticket for the incredible performance, you were waiting for so long. We know everything about the way how a professional ticket service should work. So, with us, you’ll get the lowest Fastball ticket prices and the best places for the show.