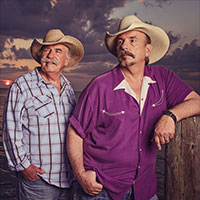 The Bellamy Brothers will be performing an event in the next dates is right in your area. Buy tickets for your favorite performer or group and you will be able to visit his show already tomorrow!

Share with friends:
Updated: 10-03-2022
The Bellamy Brothers are an American pop and country music duo consisting of brothers David Milton Bellamy  and Homer Howard Bellamy from Darby, Florida. The duo had considerable musical success in the 1970s and 1980s, starting with the release of their crossover hit "Let Your Love Flow" in 1976, a Number One single on the Billboard Hot 100.

Starting in the late 1970s, the Bellamy Brothers found success in country music as well, charting twenty number one singles and more than fifty hits overall on the country charts. To date, they have released more than fifty albums, primarily on Curb Records. They have also enjoyed success in continental Europe, with a compilation album topping the Norwegian charts in 2011 and over two dozen hit songs that were released outside the US market. In 2013, their album Bellamy Brothers & Friends: Across the Sea landed at No. 5 in the Swiss music chart and took the top spot in album sales for weeks in Switzerland. It was their third major release in Europe in three years. Their album Mermaid Cowgirl, recorded in Switzerland and released in 2014, won them Gold Record status in Switzerland. They also recorded four albums in Germany with Ralph Siegel for release to the European market.

The Bellamys released an album of gospel music, titled Jesus Is Coming, on May 8, 2007. Its title track was previously recorded on Native American in 1995. The album received two Dove Award nominations, and a second gospel album, Pray for Me, was released in 2012. They had many guest singers on this album. Their sister Ginger sang with them on the song "Suppertime", and Deborah Allen sang background vocals with Vicky Hampton on the album. Irish actor and musician Kieran McHugh played penny whistle for the song "Hymn to Him".

In 2008, the song "Let Your Love Flow" was used in the Barclaycard advert for their new contactless cards. The song re-entered the UK singles chart at No. 48 based on downloads, peaked at No. 21 in the pop charts in March 2009, and was listed on BMI's list of Top 100 Song of the Century at No. 68 that same year. A cover by Petra Haden was used in a 2010 Toyota Prius commercial. The Anthology, Vol. 1 was released in 2009 and includes the single "Guilty of the Crime", which is a collaboration with the Bacon Brothers. The video features Shannen Doherty of Beverly Hills, 90210 fame. Both sets of brothers performed the song together on the Grand Ole Opry in Nashville, Tennessee on September 1, 2009.

In 2010, the Bellamys recorded The Greatest Hits Sessions with Swiss rock star Gölä (Marco Pfeuti) and the project sold double platinum in Europe. It was at number one of the Swiss Schweizer Hitparade for 7 weeks. In 2011, they created BB&G Platinum with Gölä. Then, in 2014, they teamed up again with Gölä and recorded Mermaid Cowgirl in Switzerland. They achieved gold record status in Switzerland with this album.

In June 2010 their song "Jalepeños", about the problems of political correctness, was banned before it could even be released to radio because of its profanity. The video became a major YouTube hit with almost 3 million views. In 2012, The Bellamy Brothers collaborated with Austrian schlager singer DJ Ötzi to create the album Simply the Best. It was DJ Ötzi's first full English-language album, and entered the German album charts at number three. In June 2014, Rolling Stone magazine ranked "Old Hippie" #95 in their list of the 100 greatest country songs. During these years the brothers worked on many other collaborative song efforts as well. They recorded "Hello, Lady Harley" with Truck Stop in 2003, worked with Alan Jackson in 2005, and collaborated with Tom Astor in 2007.

The show of The Bellamy Brothers is worth seeing. You won’t regret because this talented person will gift you unforgettable emotions, help you forget about all problems and allow you to jump into the fantastic world of music for only one evening.

The primary target of our service is to offer The Bellamy Brothers tour tickets for the show of your favorite singer at the most affordable price. You may be sure that choosing our ticket service, you will not overpay and get the entrance ticket for the incredible performance, you were waiting for so long. We know everything about the way how a professional ticket service should work. So, with us, you’ll get the lowest The Bellamy Brothers ticket prices and the best places for the show.