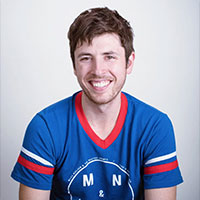 Brett Newski will be performing an event in the next dates is right in your area. Buy tickets for your favorite performer or group and you will be able to visit his show already tomorrow!

Share with friends:
Updated: 10-03-2022
Brett Newski is an North American nomad, songwriter, illustrator, and folk punk guitarist from New Berlin, Wisconsin. In 2011, he toured Southeast Asia alone for six months until completing his first solo LP, In Between Exits, while on the road. The album was written and recorded in budget hostels and apartments across Thailand, Vietnam, Hong Kong, Korea and the Philippines. Coined the “Homeless in Asia Tour”, Newski completed 30 shows in unconventional venues including Couchsurfer Apartments, a Vietnamese convenience store, an underground Korean record shop, and residential rooftops in Hong Kong while also playing club shows. During his time living in Vietnam he wrote advertising jingles for Saatchi & Saatchiin which he blatantly ripped off Cake's "Short Skirt Long Jacket" and was later prosecuted for plagiarism.

In 2012, Newski completed a 20-date tour across South Africa in support of “In Between Exits”, traveling exclusively on public transportation. The same year he formed the band “Brett Newski & the Corruption” in Vietnam with drummer Mean Matt Green (UK) and bassist Jeffro Ganter (Vancouver, Canada). The band toured across the US and Asia. The members lived in Saigon, Vietnam (aka Ho Chi Minh City) and released one album, Tiny Victories. Their sound has been compared to Weezer, REM, The Hives, The Pixies, and The Violent Femmes; His travels would laters spawn the YouTube travel show "Crusty Adventures", documenting the comedic underbelly of DIY touring in Europe, Australia and America.

In 2014, NÜSKERS released his second solo album, American Folk Armageddon, on Good Land Records. The album evoked comparisons to Jack White. The album was picked up by German record label Make My Day Records for European release. Newski toured extensively in 2014 to support the album, including tours with Rocky Votolato in Europe, Pete Donnelly and Carter Hulsey in the US, and Jon Shaban in South Africa.

Newski was recently on tour as the opening act for the Violent Femmes. His latest release "Life Upside Down" received notable praise with Rolling Stone, WXRTin Chicago, WXPN in Philadelphia, KCMP "The Current" in MPLS, WRLT "Lightning 100" in Nashville and Paste, leading to support shows with Pixies, Manchester Orchestra, New Pornographers, Chuck Ragan, and Ike Reilly

Looking for the cheapest concert tickets for the show of Brett Newski Tour 2023? If yes, then welcome to our portal offering a wide choice of either cheap of VIP tickets. Furthermore, we guarantee that here, you will definitely find so desired tickets for the performance of the Brett Newski 2022 Tour dates you adore.

The show of Brett Newski is worth seeing. You won’t regret because this talented person will gift you unforgettable emotions, help you forget about all problems and allow you to jump into the fantastic world of music for only one evening.

The primary target of our service is to offer Brett Newski tour tickets for the show of your favorite singer at the most affordable price. You may be sure that choosing our ticket service, you will not overpay and get the entrance ticket for the incredible performance, you were waiting for so long. We know everything about the way how a professional ticket service should work. So, with us, you’ll get the lowest Brett Newski ticket prices and the best places for the show.