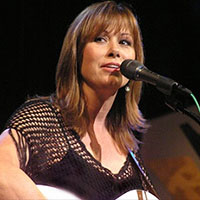 Suzy Bogguss will be performing an event in the next dates is right in your area. Buy tickets for your favorite performer or group and you will be able to visit his show already tomorrow!

Share with friends:
Updated: 02-09-2023
Susan Kay Bogguss is an American country music singer and songwriter. She began her career in the 1980s as a solo singer. In the 1990s, six of her songs were Top 10 hits, three albums were certified gold, and one album received a platinum certification. She won Top New Female Vocalist from the Academy of Country Music and the Horizon Award from the Country Music Association.

In March 2003, Bogguss and Loyal Dutchess Records signed a deal with Compadre Records. Her first release on this label was the Western swing album, Swing, that she had been recording with producer Ray Benson, the bandleader of Western swing group Asleep at the Wheel. Although the album saw only lukewarm sales (it reached No. 6 on the jazz album charts, but failed to appear on the Billboard 200), it was well received by critics. Bogguss' next album, Sweet Danger, was released in 2007. The album peaked at No. 4 on the jazz charts. In July 2011, Bogguss released her twelfth studio album, American Folk Songbook. The album consisted of renditions of several American folk songs, such as "Red River Valley". In addition to the CD, Bogguss and husband Doug Crider also produced a companion hard cover song book that included lyrics, sheet music, and a short history of each song. A paperback version of the songbook became available in 2015.

In February 2014 Bogguss released "Lucky" a collection of songs written by Merle Haggard. To partially fund the promotion of the album she created a very successful Kickstarter crowd funding campaign which raised over $75,000 with the participation of nearly 1000 contributors. The album was promoted through the Americana format and was well received.

During the summer of 2016, Bogguss conducted a celebration via her Suzy Bogguss Music Facebook page, of the 25th anniversary of the release of her Platinum selling Aces Album in 1991. Aces also was her break out album which brought her serious attention on Country Radio and secured her future on Capitol Nashville for several more albums. On August 18, 2016, the actual 25th anniversary of the release of the original Aces album, she released a new re-imagined and rerecorded version of the album entitled "Aces Redux." A release party and concert was held that night at the "3rd and Lindsley" venue in Nashville. "Aces Redux" was recorded with the help of a number of the musicians that have toured with Bogguss over the years and included background vocals by friends Beth Nielsen Chapman and Kim Carnes along with several others. The album takes a more acoustic and simpler production tack that the original which also reflects her more recent touring approach as a trio with Charlie Chadwick on standup Bass and Craig Smith on lead guitar.

Looking for the cheapest concert tickets for the show of Suzy Bogguss Tour 2024? If yes, then welcome to our portal offering a wide choice of either cheap of VIP tickets. Furthermore, we guarantee that here, you will definitely find so desired tickets for the performance of the Suzy Bogguss 2023 Tour dates you adore.

The show of Suzy Bogguss is worth seeing. You won’t regret because this talented person will gift you unforgettable emotions, help you forget about all problems and allow you to jump into the fantastic world of music for only one evening.

The primary target of our service is to offer Suzy Bogguss tour tickets for the show of your favorite singer at the most affordable price. You may be sure that choosing our ticket service, you will not overpay and get the entrance ticket for the incredible performance, you were waiting for so long. We know everything about the way how a professional ticket service should work. So, with us, you’ll get the lowest Suzy Bogguss ticket prices and the best places for the show.