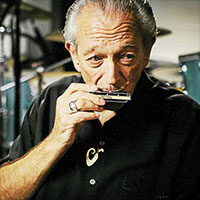 Charlie Musselwhite will be performing an event in the next dates is right in your area. Buy tickets for your favorite performer or group and you will be able to visit his show already tomorrow!

Share with friends:
Updated: 01-19-2022
Charles Douglas Musselwhite is an American electric blues harmonica player and bandleader, one of the white bluesmen who came to prominence in the early 1960s, along with Mike Bloomfield and Paul Butterfield, or bands such as Canned Heat. He has often been identified as a "white bluesman". Musselwhite was reportedly the inspiration for Elwood Blues; the character played by Dan Aykroyd in the 1980 film The Blues Brothers.

Over the years, Musselwhite has branched out in style. His 1999 recording, Continental Drifter, is accompanied by Cuarteto Patria, from Cuba's Santiago region, the Cuban music counterpart of the Mississippi Delta. Because of political differences between Cuba and the United States, the album was recorded in Bergen, Norway, with Musselwhite's wife handling the details.

Musselwhite believes the key to his musical success was finding a style in which he could express himself. He said, "I only know one tune, and I play it faster or slower, or I change the key, but it's just the one tune I've ever played in my life. It's all I know." His past two albums, Sanctuary and Delta Hardware, were released by Real World Records. Musselwhite played on Tom Waits's 1999 album Mule Variations. He can be heard at the beginning of the song "Chocolate Jesus", saying "I love it". Waits has mentioned that this is his favorite part of the song. In 2002, he was featured on the Bo Diddley tribute album Hey Bo Diddley: A Tribute!, performing the song "Hey Bo Diddley".

For the first half of 2011, Musselwhite toured with the acoustic-electric blues band Hot Tuna. In the latter half of 2011, he went on tour with Cyndi Lauper, having played harmonica on her hit album Memphis Blues. While on this tour, he appeared with Lauper on Jools Holland's television program Hootenanny on New Year's Eve 2011, performing a modified arrangement of Lauper's signature song, "Girls Just Wanna Have Fun".

In 2012, Musselewhite released the live album Juke Joint Chapel which was nominated for a Grammy for Best Traditional Blues Album. Musselwhite also teamed with Ben Harper to record the album Get Up!, which was released in January 2013. In January 2014, it won a Grammy Award for Best Blues Album. In 2014 and 2015, he won a Blues Music Award in the category Best Instrumentalist – Harmonicist. At the 40th Blues Music Awards ceremony in 2019, Musselwhite's joint composition with Ben Harper, "No Mercy In This Land", was named as 'Song of the Year'.

The show of Charlie Musselwhite is worth seeing. You won’t regret because this talented person will gift you unforgettable emotions, help you forget about all problems and allow you to jump into the fantastic world of music for only one evening.

The primary target of our service is to offer Charlie Musselwhite tour tickets for the show of your favorite singer at the most affordable price. You may be sure that choosing our ticket service, you will not overpay and get the entrance ticket for the incredible performance, you were waiting for so long. We know everything about the way how a professional ticket service should work. So, with us, you’ll get the lowest Charlie Musselwhite ticket prices and the best places for the show.