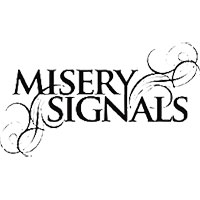 Misery Signals will be performing an event in the next dates is right in your area. Buy tickets for your favorite performer or group and you will be able to visit his show already tomorrow!

Share with friends:
Updated: 08-10-2022
Misery Signals is an American-Canadian metalcore band formed in Wisconsin in 2002. The sound of their music is defined by bright melodies backed up by odd time signatures, chugging riffs, and breakdowns.

Misery Signals was formed after the disbandment of several bands, including 7 Angels 7 Plagues, Hamartia, and Compromise. Having played briefly with 7 Angels 7 Plagues, former Compromise vocalist, Jesse Zaraska, was approached by Ryan Morgan and Kyle Johnson for a new project which would become Misery Signals. Jeff Aust from Hamartia joined on as second guitar and Ryan Morgan's brother Branden joined as the band's drummer. Aust soon left the band and has since gone on to join With Honor. He was replaced by Stu Ross, a friend of Jesse Zaraska's from St. Albert, Alberta.

In 2003 the band released its eponymous debut EP. The EP was dedicated to the memory of Jordan Wodehouse and Daniel Langlois, who were killed by a drunk driver on Interstate 20 near Heflin, Alabama while on tour with their band Compromise in support of 7 Angels 7 Plagues.

The band eventually signed to New Jersey's Ferret Music, releasing their first full-length album, Of Malice and the Magnum Heart. After extensive touring, Zaraska decided to leave the band to focus on a smaller, less aggressive project named Sleeping Girl, at which point the rest of the band decided to put up an instrumental song on their MySpace page, encouraging anyone who wanted to take over the spot of vocalist to record their own voice over the instrumental and e-mail it to the band. This was the way they found (then) new vocalist Karl Schubach, with whom they recorded the album, Mirrors.

In July 2008, Misery Signals released their third full-length entitled Controller. After extensive touring in support of Controller in early 2009, members of Misery Signals wanted to pursue other musical directions outside of their band.

On May 30, 2014, news surfaced that Misery Signals announced plans to commemorate the tenth anniversary of their 'Of Malice and the Magnum Heart' album with the "Malice X Tour" later that year. The tour featured the band's original lineup, which consisted of Jesse Zaraska (vocals), Ryan Morgan (guitars), Stu Ross (guitars), Kyle Johnson (bass), and Branden Morgan (drums), and Misery Signals performed the album in its entirety.

On March 24, 2018, at the event Midwest Meltdown in Iowa City, Iowa; Misery Signals frontman Jesse Zaraska, announced the band had been holed up on Boise, Idaho over the previous few weeks. He stated that they are, indeed, working on a new album. Zaraska stated on stage, that he believes their newest album "will be the BEST Misery Signals album yet." When asked about the style of the new album, Zaraska replied "It will probably be a lot like of Malice." The album name and release date have not been made public.

On the "Death to False Metalcore Tour 2019" with Darkest Hour and Unearth, the band played a redone song titled "Sunlifter" from their Absent Light B-Side vinyl release. Zaraska also stated November 2019 as the release date for their new album.

Looking for the cheapest concert tickets for the show of Misery Signals Tour 2023? If yes, then welcome to our portal offering a wide choice of either cheap of VIP tickets. Furthermore, we guarantee that here, you will definitely find so desired tickets for the performance of the Misery Signals 2022 Tour dates you adore.

The show of Misery Signals is worth seeing. You won’t regret because this talented person will gift you unforgettable emotions, help you forget about all problems and allow you to jump into the fantastic world of music for only one evening.

The primary target of our service is to offer Misery Signals tour tickets for the show of your favorite singer at the most affordable price. You may be sure that choosing our ticket service, you will not overpay and get the entrance ticket for the incredible performance, you were waiting for so long. We know everything about the way how a professional ticket service should work. So, with us, you’ll get the lowest Misery Signals ticket prices and the best places for the show.