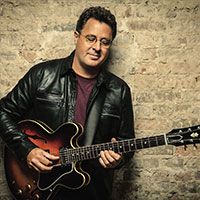 Vince Gill will be performing an event in the next dates is right in your area. Buy tickets for your favorite performer or group and you will be able to visit his show already tomorrow!

Share with friends:
Updated: 09-22-2021
Vincent Grant Gill is an American country singer, songwriter and multi-instrumentalist. He has achieved commercial success and fame both as frontman to the country rock band Pure Prairie League in the 1970s and as a solo artist beginning in 1983, where his talents as a vocalist and musician have placed him in high demand as a guest vocalist and a duet partner.

He has recorded more than 20 studio albums, charted over 40 singles on the U.S. Billboard charts as Hot Country Songs, and has sold more than 26 million albums. He has been honored by the Country Music Association with 18 CMA Awards, including two Entertainer of the Year awards and five Male Vocalist Awards. As of 2017, Gill has also earned 21 Grammy Awards, more than any other male country music artist. In 2007 he was inducted into the Country Music Hall of Fame. On February 4, 2016, Gill was inducted into the Guitar Center Rock Walk by Joe Walsh of the Eagles. In 2017, Vince Gill and Deacon Frey were hired by the Eagles in place of the late Glenn Frey.

In February 2012, Gill announced, "For the first time in 30 years, I don't have a record deal. Don't know that I want one." In March 2012, he performed at the Southern Kentucky Performing Arts Center in Bowling Green, Kentucky, for its opening night. He was recruited for the show at the 11th hour when singer LeAnn Rimes canceled the day before the opening. Gill drove up from Nashville that night with only his guitar and played to repeated standing ovations from a standing-room only house. In April 2012, it was confirmed that Gill had been working with Bonnie Tyler on her upcoming album, performing a duet with her entitled "What You Need from Me". In June 2012, he was touring and performing only bluegrass songs.

Gill received the 2,478th star of the Hollywood Walk of Fame on September 6, 2012. On October 15, 2012, it was announced that Gill would be featured in a song by Kelly Clarkson titled "Don't Rush", which appears on Clarkson's first Greatest Hits album. The album was certified Gold by the RIAA and has sold 509,093 copies as of October 13, 2013. On November 5, 2014, at the 48th annual CMA Awards Gill received the Irving Waugh award for excellence in country music. This was only the fourth time the award had been granted since its inception in 1983. The previous country music artist to receive the award was Johnny Cash.

In 2016, Gill was selected as one of 30 artists to perform on Forever Country, which celebrates 50 years of the CMA Awards.
In his career Gill has sold more than 26 million albums and accumulated more than 50 Top 40 hits. Gill joined the Eagles on tour in 2017, singing the lead vocals once sung by Glenn Frey. He has been touring with the band ever since. He plays electric guitar as a guest musician on Aaron Lewis' song "Love Me", which appears on the 2019 album: State I'm In.

Looking for the cheapest concert tickets for the show of Vince Gill Tour 2022? If yes, then welcome to our portal offering a wide choice of either cheap of VIP tickets. Furthermore, we guarantee that here, you will definitely find so desired tickets for the performance of the Vince Gill 2021 Tour dates you adore.

The show of Vince Gill is worth seeing. You won’t regret because this talented person will gift you unforgettable emotions, help you forget about all problems and allow you to jump into the fantastic world of music for only one evening.

The primary target of our service is to offer Vince Gill tour tickets for the show of your favorite singer at the most affordable price. You may be sure that choosing our ticket service, you will not overpay and get the entrance ticket for the incredible performance, you were waiting for so long. We know everything about the way how a professional ticket service should work. So, with us, you’ll get the lowest Vince Gill ticket prices and the best places for the show.