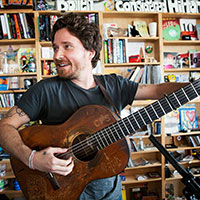 Christopher Paul Stelling will be performing an event in the next dates is right in your area. Buy tickets for your favorite performer or group and you will be able to visit his show already tomorrow!

Share with friends:
Updated: 12-02-2022
Christopher Paul Stelling is a singer-songwriter and guitarist currently based in Asheville, North Carolina. Stelling was born in Daytona Beach, Florida, and has also resided in Colorado, Washington, Massachusetts, and North Carolina. He has released five official albums: Songs of Praise and Scorn (2012), False Cities (2013), Labor Against Waste (2015), Itinerant Arias (2017) and Best of Luck (2020). He has extensively toured the United States and Europe. Including performances at the Newport Folk Festival (2015, 2017). Christopher Paul Stelling has been featured on the NPR Music series Tiny Desk Concert and All Songs Considered.

There is a fearless quality to the music of Christopher Paul Stelling. A voice that sounds both old and young, an effortless yet intricate finger-picking guitar style and lyrics that are both dramatic, and intensely confessional. It is a sound that channels the restless spirit of a young man who left home to travel the country, haunting and impassioned songs formed by endless nights alone on stage with a guitar, playing to packed houses, other times to nearly empty rooms. Stelling estimates that he has played over four hundred shows in just the past three years. It places him within a longstanding tradition that serves to nurture ones character and art.

After three albums of intimate acoustic tracks, Itinerant Arias found Christopher Paul Stelling accompanied by a full band for a first time. This sonic shift away from traditional folk accentuated Stelling’s poignant lyrics, and provided increased depth to his impassioned vocals. In a glowing review, PopMatters wrote of Itinerant Arias, “over the course of four albums, Stelling has continued to refine that sound to his growing vision of our complex world. With Itinerant Arias he takes a bold and successful step forward as a bandleader and master chronicler of our times.”  Of the album title, Stelling explained he settled on Itinerant Arias because “these songs have in common no single origin, or sense of place. like found objects, overheard stories, lost melodies... with no real home, but from a single voice.” Itinerant Arias was released on May 5, 2017 on Anti- records. To mark the album’s release, Christopher Paul Stelling provided a track-by-track breakdown of Itinerant Arias for NPR’s All Songs Considered.

Christopher Paul Stelling’s fifth album, Best of Luck, was released on February 13, 2020 on Anti- records. In 2016 a musical relationship was forged between Stelling and Ben Harper when Harper invited him to open at a series of legendary venues, including the Beacon Theatre, the Ryman Auditorium, Massey Hall. “He took me to all these legendary rooms. Just to see that what I could do would translate in spaces like that was revelatory,” said Stelling. Harper says he instantly recognized a kindred spirit in Stelling’s virtuosic finger picking and soulful delivery, and soon signed on to produce Best of Luck. Ben Harper recruited an all-star rhythm section for the recording sessions, including drummer Jimmy Paxson (Stevie Nicks, Dixie Chicks) and bassist Mike Valerio (Randy Newman, LA Philharmonic) to lend a versatility and finesse to Stelling’s soulful guitar playing. “I really believe this record is the intersection where folk and soul meet,” said Harper. Best of Luck debuted at #48 on the Americana Album Chart. Following the release of Best of Luck, Stelling embarked on an extensive tour of North America and Europe.

The show of Christopher Paul Stelling is worth seeing. You won’t regret because this talented person will gift you unforgettable emotions, help you forget about all problems and allow you to jump into the fantastic world of music for only one evening.

The primary target of our service is to offer Christopher Paul Stelling tour tickets for the show of your favorite singer at the most affordable price. You may be sure that choosing our ticket service, you will not overpay and get the entrance ticket for the incredible performance, you were waiting for so long. We know everything about the way how a professional ticket service should work. So, with us, you’ll get the lowest Christopher Paul Stelling ticket prices and the best places for the show.