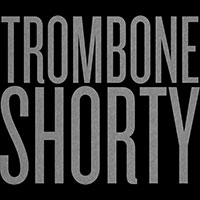 Trombone Shorty And Orleans Avenue will be performing an event in the next dates is right in your area. Buy tickets for your favorite performer or group and you will be able to visit his show already tomorrow!

Share with friends:
Updated: 01-27-2023
Troy Andrews, also known by the stage name Trombone Shorty, is an American musician, producer, actor and philanthropist from New Orleans, Louisiana. He is best known as a trombone and trumpet player but also plays drums, organ, and tuba. He has worked with some of the biggest names in rock, pop, jazz, funk, and hip hop. Andrews is the younger brother of trumpeter and bandleader James Andrews and the grandson of singer and songwriter Jessie Hill. Other musical family members are cousins Glen David Andrews and the late Travis "Trumpet Black" Hill. Andrews began playing trombone at age four, and since 2009 has toured with his own band, Trombone Shorty & Orleans Avenue.

Also in May 2014, Andrews recorded with Mark Ronson for his album Uptown Special which reached Number 5 on the US Billboard 200. Andrews also suggested to Ronson that he should contact Mystikal to perform on the album and passed along Mystikal's phone number. That collaboration led to the single "Feel Right." At the end of 2014, Andrews recorded the theme song for the remake of the Odd Couple, which premiered on CBS in February 2015. In 2015, Andrews made his feature film debut, recording the voice of the teacher Miss Othmar and the other adults in the Peanuts Movie.

Andrews performed twice for President Obama at the White House in 2015. The first time was October 14 where he performed "Fiya on the Bayou" and also performed with Usher and Queen Latifah. The second time was December 3 for the National Christmas Tree Lighting where he performed "Jingle Bells" alongside Crosby, Stills and Nash, Aloe Blacc and Reese Witherspoon. In November 2015, Andrews and Orleans Avenue toured Europe with Foo Fighters. He performed "Stay All Night" with Little Big Town at the 2016 Academy of Country Music Awards.

During the summer of 2016, Trombone Shorty & Orleans Avenue were a supporting act for the Hall & Oates tour. On September 19, 2016, it was announced that Trombone Shorty and Orleans Avenue would appear as the opening act for the Red Hot Chili Peppers on the North American leg of their 2017 The Getaway World Tour. On February 1, 2017, Blue Note Records announced that the label had signed Trombone Shorty. His Blue Note debut, Parking Lot Symphony, was released on April 28, 2017, the first day of the New Orleans Jazz and Heritage Festival.

The Trombone Shorty Foundation evolved from Andrews' Horns For Schools Project, a collaboration with New Orleans Mayor Mitch Landrieu, which helped schools across New Orleans receive quality instruments donated by Andrews personally. The Foundation's mission is "to preserve and perpetuate the unique musical culture of New Orleans by passing down its traditions to future generations of musicians." In December 2012, the Foundation partnered with Tulane University to create an After School Academy to mentor aspiring, high school musicians in the New Orleans area.

Looking for the cheapest concert tickets for the show of Trombone Shorty And Orleans Avenue Tour 2024? If yes, then welcome to our portal offering a wide choice of either cheap of VIP tickets. Furthermore, we guarantee that here, you will definitely find so desired tickets for the performance of the Trombone Shorty And Orleans Avenue 2023 Tour dates you adore.

The show of Trombone Shorty And Orleans Avenue is worth seeing. You won’t regret because this talented person will gift you unforgettable emotions, help you forget about all problems and allow you to jump into the fantastic world of music for only one evening.

The primary target of our service is to offer Trombone Shorty And Orleans Avenue tour tickets for the show of your favorite singer at the most affordable price. You may be sure that choosing our ticket service, you will not overpay and get the entrance ticket for the incredible performance, you were waiting for so long. We know everything about the way how a professional ticket service should work. So, with us, you’ll get the lowest Trombone Shorty And Orleans Avenue ticket prices and the best places for the show.