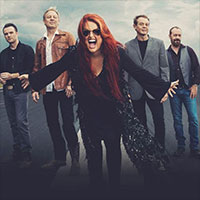 Wynonna Judd will be performing an event in the next dates is right in your area. Buy tickets for your favorite performer or group and you will be able to visit his show already tomorrow!

Share with friends:
Updated: 01-27-2023
Wynonna Ellen Judd is a multi award-winning American country music singer. Her solo albums and singles are all credited to the single name Wynonna. She first rose to fame in the 1980s alongside her mother Naomi in the country music duo The Judds. They released seven albums on Curb Records in addition to 26 singles, of which 14 were number-one hits.

The Judds disbanded in 1991 and Wynonna began a solo career, also on Curb. In her solo career, she has released eight studio albums, a live album, a holiday album, and two compilation albums, in addition to more than 20 singles. Her first three singles were "She Is His Only Need", "I Saw the Light," and "No One Else on Earth". All three reached number one on the U.S. country singles charts consecutively, and "To Be Loved by You" also hit number one in 1996, so far becoming her fourth and final number one and top ten hit to date. Three of her albums are certified platinum or higher by the RIAA. Her most recent recording was Wynonna & the Big Noise, released on February 12, 2016, and she released the single "Cool Ya'" that same month. Wynonna is most recognized for her musical work, although she has also pursued other interests starting in the 2000s, including writing, acting, and philanthropy.

Her second release for Asylum-Curb was a live CD/DVD package called Her Story: Scenes from a Lifetime, released in 2005 which was concurrently released by with her best selling autobiography, Coming Home to Myself. The album included one new studio track, "Attitude". Written by Wynonna and John Rich of Big & Rich, this song was issued as a single, peaking at No. 40 on the country charts. That same year she released her first solo Christmas album called A Classic Christmas that included a Latin version of Ave Maria. She also sang an overdubbed duet with Elvis Presley on the late 2008 RCA album Christmas Duets.

Sing: Chapter 1, her first studio album in six years, was released on February 3, 2009 on Curb Records. This album is largely composed of cover songs, except for the title track, an original composition by Rodney Crowell. It also reunites her with producers Brent Maher and Don Potter, who produced all of The Judds' 1980s albums. This album's lead-off single is "I Hear You Knocking", a blues standard first recorded by Smiley Lewis. On May 9, 2009 a seven-song EP containing dance remixes of the title track was released.

On September 14, 2010, The Judds appeared on The Oprah Winfrey Show where Wynonna discussed "her recent weight loss, her year of living dangerously and what it's like going back on stage as part of the iconic duo, The Judds." The Judds also performed their new single "I Will Stand By You", released October 4, 2010."I Will Stand By You" was released as the title track to the Judd's 2011 Greatest Hits collection, I Will Stand by You: The Essential Collection. In 2011, the New York Times bestselling author released her first novel, Restless Heart.

A new single, "Love It Out Loud" was released in May 2011. On November 27, 2011 Wynonna debuted her new band "Wynonna & The Big Noise" in Nashville, TN at 3rd and Lindsley. In March 2013 Wynonna released "Something You Can't Live Without," the first single off her forthcoming full-length album, produced by her husband/drummer Cactus Moser and set for release 2013 on Curb Records. This album—her first with all new material in over four years—was recorded in her own home studio and is deeply personal, especially noting the life-changing events the couple experienced in 2012.

Looking for the cheapest concert tickets for the show of Wynonna Judd Tour 2024? If yes, then welcome to our portal offering a wide choice of either cheap of VIP tickets. Furthermore, we guarantee that here, you will definitely find so desired tickets for the performance of the Wynonna Judd 2023 Tour dates you adore.

The show of Wynonna Judd is worth seeing. You won’t regret because this talented person will gift you unforgettable emotions, help you forget about all problems and allow you to jump into the fantastic world of music for only one evening.

The primary target of our service is to offer Wynonna Judd tour tickets for the show of your favorite singer at the most affordable price. You may be sure that choosing our ticket service, you will not overpay and get the entrance ticket for the incredible performance, you were waiting for so long. We know everything about the way how a professional ticket service should work. So, with us, you’ll get the lowest Wynonna Judd ticket prices and the best places for the show.