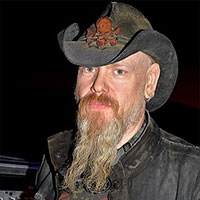 Jason Charles Miller will be performing an event in the next dates is right in your area. Buy tickets for your favorite performer or group and you will be able to visit his show already tomorrow!

Share with friends:
Updated: 07-05-2022
Jason Charles Miller is an American singer-songwriter known for his solo albums as well as being the lead vocalist and guitarist of the industrial rock band Godhead. He is a voice actor in various animation and video games. He is also part of the duo The Deadly Grind. He has since begun a music career in the country music genre.

Miller relocated to Los Angeles in 2001, where he owns a recording studio and works as a recording artist, writer and producer, voice-over artist and actor. Splitting time between Los Angeles and Nashville, his love for country and blues music has intensified, as has the influence of those that have defined his musical roots: Johnny Cash, Neil Young, Kris Kristofferson, Merle Haggard, Fleetwood Mac, Bad Company. His first single, "You Get What You Pay For," was featured in the HBO hit series True Blood, and included appearances from Felicia Day and Greg Grunberg in its music video. The Uncountry music video features guests such as Robert Picardo and Grant Imahara.

As a voice actor, Miller has appeared in over 100 animated productions and video games. Some of his credits include work on World of Warcraft, Wonder Woman, Ghost in the Shell: Stand Alone Complex, Hellsing, Read or Die and the Nickelodeon produced Avatar: The Last Airbender. His film credits include Danny Roane: First Time Director, the 2008 remake of Day of the Dead and the Sci Fi Channel's Battle Planet. He worked on a cover album from the fighting game series Guilty Gear, titled Guilty Gear XX in N.Y. Vocal Edition, where he supplied vocals over the instrumentals to create a full vocal album. In 2011, he lent his vocals to another cover album, this time for BlazBlue, the successive fighting game series to Guilty Gear, titles BlazBlue in L.A. Vocal Edition. He provided the voice of Robert Kendo in Capcom's video game Resident Evil: The Darkside Chronicles for the Wii. In 2011, he appeared in an episode of the web series The Guild. His voice can be heard in the digital collectible card game by Blizzard Entertainment, Hearthstone. Since 2017, he is part of the duo The Deadly Grind. In 2019, Miller provided the vocals for the song "Shadowbringers", the theme song for Final Fantasy XIV's third expansion of the same name.

The show of Jason Charles Miller is worth seeing. You won’t regret because this talented person will gift you unforgettable emotions, help you forget about all problems and allow you to jump into the fantastic world of music for only one evening.

The primary target of our service is to offer Jason Charles Miller tour tickets for the show of your favorite singer at the most affordable price. You may be sure that choosing our ticket service, you will not overpay and get the entrance ticket for the incredible performance, you were waiting for so long. We know everything about the way how a professional ticket service should work. So, with us, you’ll get the lowest Jason Charles Miller ticket prices and the best places for the show.