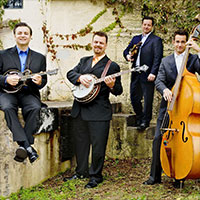 The Travelin McCourys will be performing an event in the next dates is right in your area. Buy tickets for your favorite performer or group and you will be able to visit his show already tomorrow!

Share with friends:
Updated: 05-24-2022
The Travelin' McCourys is a bluegrass band from Nashville, Tennessee, formed in 2009. The band is composed of brothers Ronnie McCoury, Rob McCoury, Alan Bartram, Jason Carter, and Cody Kilby, and was formed out of the Del McCoury Band, in which the McCourys, Bartam, and Carter still play.

Ronnie and Rob McCoury, on mandolin and banjo respectively, got their start as teenagers playing with their father, bluegrass legend Del McCoury, with his band in the eighties. Originally the band played under the name Del McCoury and the Dixie Pals, but that name was dropped in 1988 in favor of the simpler moniker Del McCoury Band. The lineup for the band would solidify with the addition of fiddler Jason Carter and bassist Mike Bub in 1992. Bub would leave in 2005 and be replaced by Alan Bartram.

Since the first tour with the Lee Boys, the Travelin' McCourys have established themselves as a separate entity from the Del McCoury Band. They still serve as the Del McCoury Band, but now split their time between both bands. While there are many similarities on stage between the two, the Travelin' McCourys have moved slightly away from the more traditional sound of the Del McCoury Band and incorporated a wider range of musical styles creating a more progressive bluegrass sound. Ronnie says, "We like to go in and play traditional bluegrass music the way we do it with Dad, but we also like to be able to step into situations where we can really stretch out. If we need to plug in, we’ll plug in. We’re open to anything.” Rolling Stone Magazine says the band, "has the musical chops to pick fast and with precision, but gives off a looser vibe," and describes their sound as a, "sublime combination of rock and bluegrass, contemporary and classic, old and young."

When they first started as the Travelin' McCourys they used a rotating cast of guitar players that included Jeff Autry, Ronnie Bowman, Jeff White, and others. As they became a full-time, touring band, they knew they needed a permanent guitar player. They agreed on Cody Kilby who was playing with Ricky Skaggs & Kentucky Thunder. Ronnie McCoury explains the decision to add Kilby came during DelFest in 2015, “I guess we had our ‘a-ha’ moment at DelFest this year. We were on stage Saturday night and it was like a light bulb went on — with Cody, we really have the perfect combination. Don’t get me wrong, we enjoy featuring guests and still plan to collaborate at times, but from now on, Cody will be involved in all of those shows. He is a great player, and fits perfectly with what we do — straddling the fence between traditional and progressive. No matter what we throw at him, he can handle it.”

The show of The Travelin McCourys is worth seeing. You won’t regret because this talented person will gift you unforgettable emotions, help you forget about all problems and allow you to jump into the fantastic world of music for only one evening.

The primary target of our service is to offer The Travelin McCourys tour tickets for the show of your favorite singer at the most affordable price. You may be sure that choosing our ticket service, you will not overpay and get the entrance ticket for the incredible performance, you were waiting for so long. We know everything about the way how a professional ticket service should work. So, with us, you’ll get the lowest The Travelin McCourys ticket prices and the best places for the show.