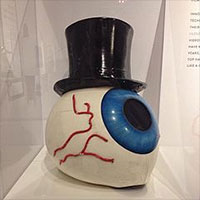 The Residents will be performing an event in the next dates is right in your area. Buy tickets for your favorite performer or group and you will be able to visit his show already tomorrow!

Share with friends:
Updated: 08-10-2022
The Residents are an American art collective best known for their avant-garde music and multimedia works. Since their first official release, Meet the Residents (1974), the group has released over sixty albums, numerous music videos and short films, three CD-ROM projects, and ten DVDs. They have undertaken seven major world tours and scored multiple films. Pioneers in exploring the potential of CD-ROM and similar technologies, the Residents have won several awards for their multimedia projects. Ralph Records, a record label focusing on avant-garde music, was started by the band in 1972.

Throughout the group's existence, the individual members have ostensibly attempted to operate under anonymity, preferring instead to have attention focused on their art output. Much outside speculation and rumor has focused on this aspect of the group. In public, the group appears silent and costumed, often wearing eyeball helmets, top hats and tails—a long-lasting costume now recognized as its signature iconography. In 2017, Hardy Fox, long known to be associated with the Residents, identified himself as the band's co-founder and primary composer.

The Residents' albums generally fall into two categories: deconstructions of Western popular music, and complex conceptual pieces composed around a theme, theory, or plot. The group is noted for surrealistic lyrics and sound, disregard for conventional music composition.

In March 2017, the group released their first studio album since Coochie Brake, entitled The Ghost of Hope. The album, based around historical train wrecks from the late 19th century and early 20th century, featured collaborators such as Eric Drew Feldman and Nolan Cook, as well as the final songwriting and performance contributions from the recently retired Bobuck.

In October 2017, the group's new tour, entitled In Between Dreams, kicked off in Copenhagen, Denmark (after earlier preview shows in Japan, and cancelled dates at the Safe as Milk festival in Wales earlier in the year). In Between Dreams discarded the "Randy, Rico and Bob" personas which the band had been using since the beginning of the decade, and instead introduced "The Real Residents"; "Tyrone" the singer, "Eekie" the guitarist, "Erkie" the keyboardist, and a new member, percussionist "Cha Cha". The decoration of the show consisted of a blue and white checkered backdrop, dynamic lighting effects, and the same giant ball screen from the Shadowland tour for displaying short animated clips between songs. The videos consisted of various well-known figures recalling dreams; Richard Nixon's dream about being a blues singer, John Wayne's nightmare about a lone ballerina that disappears when he attempts to approach her, and Mother Teresa's dream about a train wreck. In Between Dreams ran through Europe from late October to the end of November 2017, and later in the United States, from April to early May 2018.

At the beginning of 2018, The Residents launched their pREServed remaster series – each original Residents studio album, completely remastered and presented with contemporary bonus tracks as well as a great deal of previously unheard and unknown material from the group's archives. The series was launched in January with the re-issue of Meet The Residents, and The Third Reich 'N Roll, which were followed in March with Fingerprince and Duck Stab!/Buster & Glen, and as a Record Store Day limited vinyl edition in April, the debut official release of the 1970 demo tape The Warner Bros. Album.

As well as continuing to examine their voluminous archives for the ongoing pREServed series, the group have also been working on two upcoming album releases – Intruders, due for release in October 2018, and Dyin' Dog, the "blues" album previewed during the In Between Dreams tour, due for release in 2020.

Looking for the cheapest concert tickets for the show of The Residents Tour 2023? If yes, then welcome to our portal offering a wide choice of either cheap of VIP tickets. Furthermore, we guarantee that here, you will definitely find so desired tickets for the performance of the The Residents 2022 Tour dates you adore.

The show of The Residents is worth seeing. You won’t regret because this talented person will gift you unforgettable emotions, help you forget about all problems and allow you to jump into the fantastic world of music for only one evening.

The primary target of our service is to offer The Residents tour tickets for the show of your favorite singer at the most affordable price. You may be sure that choosing our ticket service, you will not overpay and get the entrance ticket for the incredible performance, you were waiting for so long. We know everything about the way how a professional ticket service should work. So, with us, you’ll get the lowest The Residents ticket prices and the best places for the show.