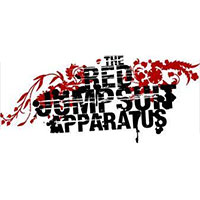 The Red Jumpsuit Apparatus will be performing an event in the next dates is right in your area. Buy tickets for your favorite performer or group and you will be able to visit his show already tomorrow!

Share with friends:
Updated: 10-03-2022
The Red Jumpsuit Apparatus is an American rock band that was formed in Middleburg, Florida, in 2003. The band is best known for their 2006 single "Face Down" from their major-label release Don't You Fake It and has released five studio albums to date. The current members are Ronnie Winter (lead vocals), Joey Westwood (bass), Josh Burke (lead guitar), Randy Winter (rhythm guitar) and John Espy (drums).

Originating in Florida, childhood friends Ronnie Winter and Duke Kitchens started the band while attending an AP music theory class in 2001. The Red Jumpsuit Apparatus was officially formed in 2003 after the addition of other members who were then in other bands. The band name was chosen by the band voting for random words they threw on a wall.

The Red Jumpsuit Apparatus worked with Vision Sound studios in Orange Park, Florida, which released a "6 song EP CD that was spread throughout different countries to promote the band in 2005". The band began to become more popular as they used certain social media, namely Myspace, to advertise their music. While popular in their local scene, the band found it difficult to secure label support. This is why the band took 18 months to write songs before going into the live scene. They built a fan base with continued live shows, which attracted the attention of Jason Flom of Virgin Records in 2005, after which they began work on their first album.

On March 15, 2013, the band released an EP titled Et Tu, Brute?. The EP was produced by David Bendeth (producer of Don't You Fake It). Prior to its release, the band released two of the songs on their page. On October 11, 2013, the band revealed their fourth studio album, titled 4, was 'coming soon' via their Facebook page. They also revealed that David Bendeth would be producing the LP. Three days later, again through Facebook, the band announced Matt Carter was returning to the band and would be playing lead guitar for 4. On January 1, 2014, the band announced that 4, as well as the rest of their discography, would be released July 4, 2014.

This band planned to perform their first rock show in India at the 2016 edition of Saarang, the cultural fest of IIT Madras, on January 9, 2016. In a November 27 post on their official Instagram page, RJA announced their anniversary tour dates. They were one of the first official bands announced for 2017's Rock on the Range in Columbus, Ohio.

In an April 2017 interview, Winter said that after their anniversary tour, the band would head to the studio in southern California to record The Awakening. It would be co-produced by him and his wife, and was to be released in the same year. However, according to coverage by Alternative Press of a post and comments on the band's Facebook page in July 2017, the new record would be released in 2018, along with a new single and tour in the fall of 2017. It was released on March 30, 2018.

In September 2018 an Australian tour was announced to be taking place in December of the same year featuring support from Australian band The Comfort. In December 2018, the band surprised dropped a new song entitled "Land Down Under" which later was confirmed to be a cover song by Men At Work.

The show of The Red Jumpsuit Apparatus is worth seeing. You won’t regret because this talented person will gift you unforgettable emotions, help you forget about all problems and allow you to jump into the fantastic world of music for only one evening.

The primary target of our service is to offer The Red Jumpsuit Apparatus tour tickets for the show of your favorite singer at the most affordable price. You may be sure that choosing our ticket service, you will not overpay and get the entrance ticket for the incredible performance, you were waiting for so long. We know everything about the way how a professional ticket service should work. So, with us, you’ll get the lowest The Red Jumpsuit Apparatus ticket prices and the best places for the show.