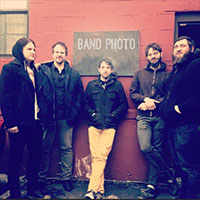 Hallelujah The Hills will be performing an event in the next dates is right in your area. Buy tickets for your favorite performer or group and you will be able to visit his show already tomorrow!

Share with friends:
Updated: 10-24-2021
Hallelujah the Hills is an American indie rock band from Boston, Massachusetts, formed in 2005 by Ryan Walsh. They have been hailed by the Boston Phoenix as "one of Boston's most prized pop possessions", received a 3 1/2 star review for their debut in Rolling Stone Magazine, and have been praised by Pitchfork Media as having "vivid lyrics," and a "knack for crafting fist-pumping anthems."

The band was signed to Misra Records in 2006 on which they released their first two full-length albums. They have co-written a song with Triumph the Insult Comic Dog, collaborated with author Jonathan Lethem, and have had a live performance interrupted by Chevy Chase.

Recorded at 1809 Studios in Macedon, New York, the band finished the fourth album in five days in early 2014. In a blog entry posted during the sessions, Walsh hinted that the album had some connection to The Fox Sisters who are regularly credited as being the accidental inventors of the Spiritualist movement in America in the late 1800s. Have You Ever Done Something Evil? was released on May 13, 2014. The album was a critical success, earning the band high praise from SPIN, Stereogum, Noisey, Blurt Magazine and more. Popmatters declared the album the "#1 Overlooked Album of the Year," calling it the band's "masterstroke." Evil's first single "Pick Up An Old Phone" was subsequently BBC Radio6's song of the day in April 2014. The band won two Boston Music Awards for Evil including Best Rock Act and Best Video.

Following the album's release, the band toured California performing a week of live dates and an appearance on the Improv4Humans podcast, wherein comedians Matt Besser, Lauren Lapkus, and others created comedic scenes based on live performances of the band's songs. This podcast recording happened just hours after the band was robbed in Oakland, California where all of the band's personal items and merchandise was stolen while they were on stage at The New Parish. Upon their return to the east coast, the band created two additional music videos— one based on an improvised scene with comedian James Adomian (Comedy Bang Bang, Last Comic Standing), and another where the band staged a house party and filmed the results. Taking part in a live-streamed event called "Behind The Album," songwriter Ryan Walsh likened the odds of their fourth album coming together the way it did to "pulling off a heist."

On April 12, 2016, Hallelujah The Hills returned with A Band Is Something To Figure Out, their fifth full-length album, recorded almost ten years to the day of their first rehearsal.

The show of Hallelujah The Hills is worth seeing. You won’t regret because this talented person will gift you unforgettable emotions, help you forget about all problems and allow you to jump into the fantastic world of music for only one evening.

The primary target of our service is to offer Hallelujah The Hills tour tickets for the show of your favorite singer at the most affordable price. You may be sure that choosing our ticket service, you will not overpay and get the entrance ticket for the incredible performance, you were waiting for so long. We know everything about the way how a professional ticket service should work. So, with us, you’ll get the lowest Hallelujah The Hills ticket prices and the best places for the show.