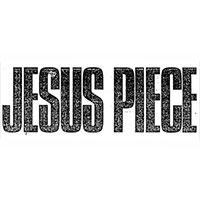 Jesus Piece will be performing an event in the next dates is right in your area. Buy tickets for your favorite performer or group and you will be able to visit his show already tomorrow!

Share with friends:
Updated: 01-27-2023
Jesus Piece is an American metalcore and hardcore band from Philadelphia, Pennsylvania, formed in 2015. They're known for their chaotic live shows and signed to Southern Lord Records in 2018 with the release of their debut Only Self. They've toured with acts such as Code Orange, Knocked Loose, and Ghostemane within the past couple of years.

The band formed in 2015 with the current line up consisting of Arron Heard on vocals, along with "guitarists David Updike and John DiStefano, bassist Anthony Marinaro and drummer Luis Aponte". They self-released their first demo/EP in the same year, followed by a self-released EP in the Summer of 2016. In 2017, they did a split EP with Malice at the Palace which was released through Bridge Nine Records. In 2018, the band signed to Southern Lord Records and released their full-length debut Only Self on August 24 of that year. Only Self received positive reviews from critics being noted for it's punishing and heavy sound. Recently, they've announced they will be supporting Code Orange's headlining tour this April along with Show Me the Body, Year of the Knife, and Machine Girl.

Jesus Piece has been described as metalcore and hardcore punk by multiple media outlets. According to Arron Heard when being interviewed by CVLT Nation writer Bruce when asked about the band's influences for their debut album, he mentions "Anything from brutal and old school death metal to straight-up punk and hardcore influences this band. We started this band to be straight-up death metal but it evolved into what the EP was." In the same interview, when asked about the evolution of the sound compared to earlier releases, Arron mentions " We came together pretty quickly so after a few years we’re finally becoming totally comfortable with what we want to do. I know we’re really not trying to pull any direct influences so it’s made the writing process harder but it’s worth it. We just want to make unique metallic hardcore that we want to hear."

Pitchfork's Andy O'Connor described their sound and his opening thoughts with "Jesus Piece rage at the nexus of hardcore, death metal, industrial, and ’90s metalcore. They’re part of a new metalcore movement that proves that experimentation and succinct, clobbering riffs can not only coexist, but make for natural partners. On their first full-length, Only Self, they make the case that such should be the new tradition."

Metal Injection's J. Andrew mentions his thoughts on their sound in his review for Only Self "Jesus Piece plays a satisfying brutal style of hardcore that rides several lines – beatdown, slam, metalcore – while still maintaining a consistent, recognizable feel." A very common motif with bands in this sound and style from recently is the incorporation of sludgy breakdowns and experimental aspects bleeding through the heavy bits.

Looking for the cheapest concert tickets for the show of Jesus Piece Tour 2024? If yes, then welcome to our portal offering a wide choice of either cheap of VIP tickets. Furthermore, we guarantee that here, you will definitely find so desired tickets for the performance of the Jesus Piece 2023 Tour dates you adore.

The show of Jesus Piece is worth seeing. You won’t regret because this talented person will gift you unforgettable emotions, help you forget about all problems and allow you to jump into the fantastic world of music for only one evening.

The primary target of our service is to offer Jesus Piece tour tickets for the show of your favorite singer at the most affordable price. You may be sure that choosing our ticket service, you will not overpay and get the entrance ticket for the incredible performance, you were waiting for so long. We know everything about the way how a professional ticket service should work. So, with us, you’ll get the lowest Jesus Piece ticket prices and the best places for the show.