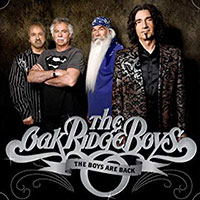 The Oak Ridge Boys will be performing an event in the next dates is right in your area. Buy tickets for your favorite performer or group and you will be able to visit his show already tomorrow!

Share with friends:
Updated: 01-19-2022
The Oak Ridge Boys are an American country and gospel vocal quartet. The group was founded in the 1940s as the Oak Ridge Quartet. They became popular in southern gospel during the 1950s. Their name was changed to the Oak Ridge Boys in the early 1960s, and they remained a gospel group until the mid-1970s, when they changed their image and concentrated on country music.

The lineup which produced their most well-known country and crossover hits (such as "Elvira" (1981), "Bobbie Sue" (1982), and "American Made" (1983) consists of Duane Allen (lead), Joe Bonsall (tenor), William Lee Golden (baritone), and Richard Sterban (bass). Golden and Allen joined the group in the mid-1960s, and Sterban and Bonsall joined in the early 1970s. Aside from an eight-year gap (1987–95) when Golden left the group and was replaced, this lineup has been together since 1973 and continues to tour and record.

The Oak Ridge Boys release their first-ever live hits album Boys Night Out in April 2014 through Cleopatra Records. In an interview, Joe Bonsall said, "Here it is live and kicking with the audience singing with us. It's totally updated and different. I think for our real fans, this is going to be a gigantic treat, because our fans have clamored for a live album for years, and for people who don't know us or don't know us as well, to listen to this makes them go, "Oh wow, these guys are still sounding great, holy cow." I think it's going to be a good project for us all around."

On August 21, 2015, they revealed a collaboration recording of their hit "Elvira". This collaboration was recorded with Sing-Off-winning, country a cappella group Home Free, who uploaded the video to their YouTube channel. The video was an instant hit, reaching 90,000 views within the first 20 hours of it being uploaded. On October 25, 2015, the Oak Ridge Boys were inducted into the Country Music Hall of Fame during the Medallion Ceremony, in the category of modern era artists. It was presented by Kenny Rogers (a previous inductee).

In 2017, the Oak Ridge Boys joined Third Day at the legendary FAME Studios in Muscle Shoals, Alabama, to record a cover version of Paul Simon's "Loves Me Like A Rock" for the Third Day album, Revival. In September 2018, the Oak Ridge Boys wrote a variation of their hit song "Elvira", in collaboration with the Tennessee Titans, named Titans Code of Conduct. Although the lyrics were drastically changed, the melody stays the same.

In December 2018, the Oak Ridge Boys attended the funeral of the 41st President of the United States, George H. W. Bush, in Houston, Texas, and sang "Amazing Grace" during the service. On June 25, 2019, The New York Times Magazine listed The Oak Ridge Boys among hundreds of artists whose material was reportedly destroyed in the 2008 Universal fire. On October 4, 2019, The Oak Ridge Boys announced their partnership and public service announcement with AARP and the U.S. Department of Justice to help raise awareness of elder fraud.

The show of The Oak Ridge Boys is worth seeing. You won’t regret because this talented person will gift you unforgettable emotions, help you forget about all problems and allow you to jump into the fantastic world of music for only one evening.

The primary target of our service is to offer The Oak Ridge Boys tour tickets for the show of your favorite singer at the most affordable price. You may be sure that choosing our ticket service, you will not overpay and get the entrance ticket for the incredible performance, you were waiting for so long. We know everything about the way how a professional ticket service should work. So, with us, you’ll get the lowest The Oak Ridge Boys ticket prices and the best places for the show.