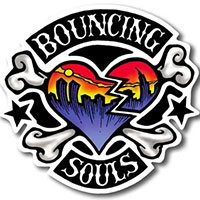 The Bouncing Souls will be performing an event in the next dates is right in your area. Buy tickets for your favorite performer or group and you will be able to visit his show already tomorrow!

Share with friends:
Updated: 08-10-2022
The Bouncing Souls are an American Punk band from New Brunswick, New Jersey, formed in 1989. By the time of their acknowledgment by the national punk rock scene, they had reignited a "pogo" element to New Jersey punk rock by playing fast light-hearted songs, a model followed by various other local bands.

The four original members grew up in Basking Ridge, New Jersey and played in smaller bands while attending Ridge High School. Although they decided to forgo college, they made the decision to move to a college town; New Brunswick, NJ, which is the home of Rutgers University. New Brunswick had a reputation for supporting underground music, and over the years had seen not only musical acts but actors enjoy professional success. The Bouncing Souls not only became a staple in the New Brunswick music scene, but also helped other bands gain an audience by opening up for them in the clubs around town, as well as parties and shows they put on themselves. The band's name is a derivative of Doc Martens shoes, specifically their advertising slogan "with Bouncing Soles". Doctor Martens air-cushioned soles are a staple of punk dress.

In 2008, while at the Vans Warped Tour stop in their home state of New Jersey, the band helped Music Saves Lives raise the blood supply by signing a guitar for the non-profit to auction off. In 2009, the band released a series of sixteen digital songs and four 7" EPs as part of the 20th Anniversary Series. Twelve of these songs were being released into an album titled Ghosts on the Boardwalk which was released on January 12, 2010. In 2011, the band was the first to be featured on SideOneDummy's The Complete Control Sessions series of live recordings. The band's contribution to the series features six songs, one of which is a Misfits cover.

The Bouncing Souls released their ninth studio album, Comet on June 12, 2012 via Rise Records, their first album for that label. The artwork and track listing was released on March 12, 2012, along with the album's third track, "Static," which is available to be streamed online. On 25 June 2013, The Bouncing Souls confirmed that drummer Michael McDermott would be leaving the band in order to 'pursue other musical interests'. The band later added they don't know what's next for them, whilst suggesting the remaining members will continue performing in the band.

On September 26, 2013, George Rebelo of Hot Water Music and Against Me! officially joined the band as the new drummer during a secret show at Asbury Lanes. The band released their tenth studio album, Simplicity on July 29, 2016. On March 15, 2019 the band will release the 6 song Crucial Moments EP along with a new book to celebrate the band's 30th anniversary.

The show of The Bouncing Souls is worth seeing. You won’t regret because this talented person will gift you unforgettable emotions, help you forget about all problems and allow you to jump into the fantastic world of music for only one evening.

The primary target of our service is to offer The Bouncing Souls tour tickets for the show of your favorite singer at the most affordable price. You may be sure that choosing our ticket service, you will not overpay and get the entrance ticket for the incredible performance, you were waiting for so long. We know everything about the way how a professional ticket service should work. So, with us, you’ll get the lowest The Bouncing Souls ticket prices and the best places for the show.