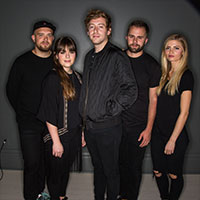 The National Parks will be performing an event in the next dates is right in your area. Buy tickets for your favorite performer or group and you will be able to visit his show already tomorrow!

Formed in 2013, with March 15, 2013 marking the band's first public performance, their debut album, Young won them a devoted following, climbing to #13 on the ITunes singer/songwriter chart upon its release. Since that time, the band has released two additional studio albums and has sold out shows in New York City, Washington, D.C., and Los Angeles.

The National Parks began as the brainchild of frontman Brady Parks. While studying Advertising Design at Brigham Young University in Provo, Utah, Parks began writing a collection of acoustic-heavy narrative folk tunes. After forming a group called Brady Parks and the IndiAnns for a battle of the bands at Velour Live Music Gallery, this group went on to record an album called The Mossy Mountain, which was released to iTunes and Spotify on February 24, 2012.

The success of this first release prompted them to launch a successful Kickstarter campaign for the album that would eventually become Young. After several lineup changes, the group rebranded and started fresh as The National Parks, with March 15, 2013 marking the band's first public performance. This public performance was hyped by a guerrilla marketing campaign. Hundreds of flyers were circulated around Provo, UT that offered little information other than the line, “Who are The National Parks?” A link to their website led to a video containing commentary from popular local bands and music venue owners who each explained that The National Parks were a band to be excited about.

The group released Young in 2013. The album was recorded at June Audio with producer Scott Wiley and climbed to #13 on the ITunes singer/songwriter chart. In January 2014 the band released the standalone single "As We Ran," which was written for the documentary film Love in the Tetons. The group donated the first month of proceeds from the single to the National Parks Conservation Association. The National Parks began touring around the release of Young. The online success of the album and "As We Ran" helped them find growing crowds around Utah as well as in Seattle, Los Angeles, Chicago, and New York City.

In August 2017, The National Parks performed on JBTV in Chicago, announcing that their third album, Places, would be released September 15, 2017. The music video for the lead single, "Places," debuted through Impose Magazine on June 16, 2017. More pop infused than previous releases, Places features folk-pop song craft on acoustic guitar and violin, backed by electronic textures. On September 8, 2017, the band launched the Places Tour. The tour concluded October 27, 2017 and took the band through 19 different cities across the United States. On March 22, 2019, The National Parks released a new single, "I Can Feel It".

The show of The National Parks is worth seeing. You won’t regret because this talented person will gift you unforgettable emotions, help you forget about all problems and allow you to jump into the fantastic world of music for only one evening.

The primary target of our service is to offer The National Parks tour tickets for the show of your favorite singer at the most affordable price. You may be sure that choosing our ticket service, you will not overpay and get the entrance ticket for the incredible performance, you were waiting for so long. We know everything about the way how a professional ticket service should work. So, with us, you’ll get the lowest The National Parks ticket prices and the best places for the show.