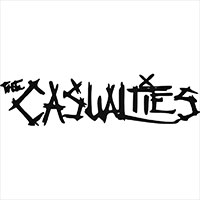 The Casualties will be performing an event in the next dates is right in your area. Buy tickets for your favorite performer or group and you will be able to visit his show already tomorrow!

Share with friends:
Updated: 12-02-2021
The Casualties are an American street punk band which was formed in New York City, New York in 1990. It was formed by vocalist Jorge Herrera, Hank (guitar), Colin Wolf (vocals), Mark Yoshitomi (bass) and Yureesh Hooker (drums). On July 11, 2017 it was announced on the band's Facebook page, that original frontman Jorge Herrera had officially retired from touring. The band as of July 2017 consists of members Jake Kolatis (Guitarist), Marc Meggers (Drums), Rick Lopez (Bassist), and David Rodriguez (Vocals).

The Casualties were formed in 1990, with original members Jorge Herrera (vocals), Hank (guitar), Colin Wolf (vocals), Mark Yoshitomi (bass) and Yureesh Hooker (drums). The members aimed to return to what they viewed as the "golden era" of street punk, embodied by bands such as The Exploited and Charged GBH which they believed had disappeared by 1985. During the early years, the lineup was fluid, with several changes.

In early 1991 Hank left the band, to be replaced by Fred Backus on guitar to record Political Sin in March 1991 for the Benefit for Beer compilation. Soon more changes were in the works, with new guitarist Fred heading off to school. C Squat's Scott temporarily filled Fred's shoes until he returned a short time later. During this period, guitarist Hank filled in for a couple of shows, and Steve Distraught also played briefly with the group on second guitar. The Casualties stabilized long enough to record the first demo in the fall of 1991 and the 40 oz Casualty EP in the spring of 1992, and was building up a fan base in their hometown of New York City. At the end of 1992, Mark and Fred left the band and were replaced by Mike Roberts on bass and Jake Kolatis on the guitar, followed by the departure of Yureesh and Colin in 1994, to be replaced on drums by Shawn, while the band went down to a single vocalist. 1994 sees the recording of the 4 song EP, Drinking Is Our Way Of Life, however it would not be released. The songs would later appear on the Casualties "early years 1990-1995" CD in 1999. In 1995, the band's second release, the 4 track A Fuckin' Way Of Life E.P. was released on Eyeball Records. After recording A Fuckin' Way of Life, Shawn left the band, and Marc Eggers (nicknamed Meggers) of the Rivits became the regular drummer. The line-up of Jorge, Jake, Mike and Meggers continued until 1997.

The 2000s have seen the band to continue to tour and produce albums (an album list can be seen below). They have toured with several other bands, such as The Exploited, GBH, Cockney Rejects, Slaughter & the Dogs, and the English Dogs. In December 2009, The Casualties toured alongside Hatebreed, The Acacia Strain, Crowbar, and Thy Will Be Done as part of the Stillborn Fest. In the summer of 2012, The Casualties co-headlined the Tonight We Unite tour along with Nekromantix, where they played For The Punx in its entirety, the first time they had played the album through since its release in 1997. Later that year, The Casualties released their new album titled Resistance through Season of Mist. In 2013, The Casualties played at the largest punk rock festival in the world, the Rebellion Festival in Blackpool, England, where they shared the stage with The Exploited, Special Duties, Chron Gen and Anti-Establishment, and others.

On January 22, 2016, the band released their tenth studio album titled Chaos Sound. The album was recorded in Orange County, California at Buzzbomb Studio, produces by Paul Miner and released under Season Of Mist. It would later be the last album to feature original vocalist Jorge Herrera. In the second quarter of 2017, Herrera retired from touring amid multiple alleged claims of sexual assault. Frontman of The Krum Bums, David Rodriguez officially replaced Herrera, changing the band's line-up for the first time in 19 years. Guitarist Jake Kolatis and drummer Meggers are the two remaining long term members of the band.

Looking for the cheapest concert tickets for the show of The Casualties Tour 2022? If yes, then welcome to our portal offering a wide choice of either cheap of VIP tickets. Furthermore, we guarantee that here, you will definitely find so desired tickets for the performance of the The Casualties 2021 Tour dates you adore.

The show of The Casualties is worth seeing. You won’t regret because this talented person will gift you unforgettable emotions, help you forget about all problems and allow you to jump into the fantastic world of music for only one evening.

The primary target of our service is to offer The Casualties tour tickets for the show of your favorite singer at the most affordable price. You may be sure that choosing our ticket service, you will not overpay and get the entrance ticket for the incredible performance, you were waiting for so long. We know everything about the way how a professional ticket service should work. So, with us, you’ll get the lowest The Casualties ticket prices and the best places for the show.