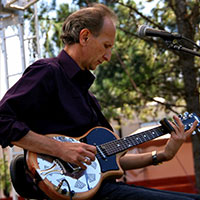 Terry Robb will be performing an event in the next dates is right in your area. Buy tickets for your favorite performer or group and you will be able to visit his show already tomorrow!

Share with friends:
Updated: 01-27-2022
Terry Robb is a Canadian fingerstyle guitarist, composer, arranger and record producer living in the United States. He plays electric and acoustic guitar, and is associated with the American Primitive Guitar genre through his collaboration with steel string guitarist John Fahey. He is a member of the Oregon Music Hall of Fame and Cascade Blues Association Hall of Fame, and was honored with the eponymous "Terry Robb" Muddy Award for Best Acoustic Guitar in 2011. His original compositions draw on the Delta blues, ragtime, folk music, country music and jazz traditions.

Born in Vancouver, British Columbia, Robb moved to the United States with his parents, living briefly in Pittsburgh, Pa., before settling in Portland, Ore., at the age of seven. He was immersed in music and the arts at an early age, and received his first guitar at age eight from an uncle who played swing guitar and was associated with the Lawrence Welk Orchestra. During the blues revival of the 1960s, he was exposed to blues, country, ragtime and early jazz musicians that were being rediscovered, as well as contemporary jazz and blues rock musicians, which led to a lifelong interest in the blues and Americana music. He began performing in bands at age 12, playing dances at local junior high and high schools, and was soon after performing solo sets in coffee houses around Portland. Following his graduation from Parkrose High School in 1974, he studied fine arts and music theory under Czech-American classical composer Tomáš Svoboda at Portland State University before receiving his baccalaureate degree in 1978.

During his years at Burnside Records, Robb served as the label's house producer for several of its recording artists, such as Alice Stuart, Sheila Wilcoxson and Bill Rhoades. He also became a frequent producer or session guitarist for other Pacific Northwest artists, such as Curtis Salgado, Duffy Bishop and Phil Kellogg.

In 2008, Robb launched the independent label Psychedelta Records with fellow guitarist Adam Scramstad to support the music of his students and other local musicians. Among its releases include the only duet studio recording of the late Portland blues women Linda Hornbuckle and Janice Scroggins, Sista, which Robb produced, and Muddyvishnu, Robb's first electric band album since his 1992 recording of Sensitive Guy.

In 2006, Robb was approached by cartoonist and friend, John Callahan, to produce an album of original compositions. Callahan, a quadriplegic since age 21, had provided the graphic logo for Psychedelta Records and was the subject of the forthcoming documentary film "Touch Me Someplace I Can Feel," which includes footage of the album's recording. Released on Bone Clone Records, Purple Winos in the Rain features Callahan on vocals, harmonica and ukulele, with guest artists Peter Boe on piano and Robb on acoustic and bottleneck guitars, and a cameo appearance by Tom Waits. In 2018, one of the album's duet recordings of Callahan and Robb, "Texas When You Go," was featured in the Hollywood biopic Don't Worry, He Won't Get Far On Foot produced by Amazon Studios.

In the 2012 documentary film "In Search of Blind Joe Death: The Saga of John Fahey," Robb is featured among the friends and colleagues interviewed about Fahey's life and legacy, and he performs "When the Springtime Comes Again" on Fahey's Martin D76, as seen on the cover of The Best of John Fahey 1959-1977.

In 2016, Robb released his debut album with Portland-based record label NiaSounds, Cool on the Bloom. The album prompted Vintage Guitar writer Dan Forte to describe Robb as "...one of the best players, on acoustic and electric, embracing a range of blues styles and then some...", and feature an exclusive video performance of the title track song on its website. In 2019, Robb released Confessin' My Dues, his 15th solo recording and second album with NiaSounds, featuring renowned jazz musicians Gary Hobbs and Dave Captein.

Robb is a self-taught fingerpicking guitarist associated with the American Primitive Guitar style, which draws upon diverse musical influences while rooted in the blues. Known primarily as a folk-blues guitarist, he learned to play guitar by listening to blues musicians, such as Charley Patton and Mississippi John Hurt, and has developed a distinctive fingerpicking technique in which he plays the bass line, rhythm chords, and single-note leads simultaneously. In his original compositions and artistic styling, he incorporates influences from other genres, such as jazz, folk music, country music, classical and world music, often utilizing odd time measures, to personalize his music and story telling. An electric and acoustic guitarist, Robb plays Fender, Martin, National, and Weissenborn guitars.

Looking for the cheapest concert tickets for the show of Terry Robb Tour 2023? If yes, then welcome to our portal offering a wide choice of either cheap of VIP tickets. Furthermore, we guarantee that here, you will definitely find so desired tickets for the performance of the Terry Robb 2022 Tour dates you adore.

The show of Terry Robb is worth seeing. You won’t regret because this talented person will gift you unforgettable emotions, help you forget about all problems and allow you to jump into the fantastic world of music for only one evening.

The primary target of our service is to offer Terry Robb tour tickets for the show of your favorite singer at the most affordable price. You may be sure that choosing our ticket service, you will not overpay and get the entrance ticket for the incredible performance, you were waiting for so long. We know everything about the way how a professional ticket service should work. So, with us, you’ll get the lowest Terry Robb ticket prices and the best places for the show.