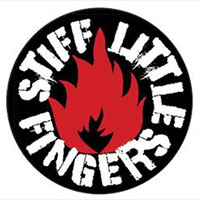 Stiff Little Fingers will be performing an event in the next dates is right in your area. Buy tickets for your favorite performer or group and you will be able to visit his show already tomorrow!

Share with friends:
Updated: 01-27-2023
Stiff Little Fingers are a punk rock band from Belfast, Northern Ireland. They formed in 1977, at the height of the Troubles. They started out as a schoolboy band called Highway Star (named after the Deep Purple song), doing rock covers, until they discovered punk. They split up after six years and four albums, although they reformed five years later, in 1987. Despite major personnel changes, they are still touring and recording. In 2014, the band released their tenth studio album and a world tour followed its release. Jake Burns, their lead singer, is the only member to have been with the band during all its incarnations, but in March 2006, original bass guitarist Ali McMordie rejoined them following the departure of The Jam bass player Bruce Foxton after fifteen years.

On 23 January 2006, it was announced that original bass guitarist Ali McMordie was to rejoin the band for the duration of their upcoming March tour. The tour was a success, with many fans writing into SLF's message board saying how much they enjoyed it, and how fired up the band seemed to be. After much discussion regarding the status of McMordie within the band after the tour, on 21 April 2006, Burns posted on the message board "For the time being Mr. McMordie is happy to continue as long as his busy schedule allows. It may be that occasionally we have to bring on a "substitute", if he is up to his eyes and we need to do something, but hopefully we can avoid that." Mr. McMordie has occasionally been unable to tour due to other commitments and on those occasions, his place has been taken by Mark DeRosa of Chicago band, Dummy.

On 25 May 2006, SLF announced Ian McCallum would not be able to join the band on its Spring US tour due to health reasons. John Haggerty of Pegboy and Naked Raygun fame would fill in on guitar. McCallum has since rejoined the band and has toured with them ever since.

On 9 March 2007, Burns announced that Stiff Little Fingers would record a new album, to be released later that year. A new song, "Liars Club", was added to their set lists that year. The track was named after a bar Burns drove past while listening to a press report about Tony Blair, George W. Bush and the Iraq War. At the Glasgow Barrowlands gig on 17 March 2011 Burns announced that the new album was being recorded – hopefully for a 2011 release – before launching into a new song, "Full Steam Backwards", about the banking crisis in the UK. On 16 October 2013, the band launched a project on Pledgemusic to raise funds for the album to be released in March 2014. The project reached its funding goal within 5 hours. Recording was completed in January 2014 and the album, titled The album, titled No Going Back was released through PledgeMusic on 15 March 2014 and to the general public on 11 August 2014. A tour in support of the album kicked off in early 2014 and included dates in the US on the Summer Nationals tour with The Offspring, Bad Religion, The Vandals, Pennywise and Naked Raygun. The album was the band's first UK chart success since 1983's "All The Best" and their first number 1 record on the BBC Rock Album Chart.

The show of Stiff Little Fingers is worth seeing. You won’t regret because this talented person will gift you unforgettable emotions, help you forget about all problems and allow you to jump into the fantastic world of music for only one evening.

The primary target of our service is to offer Stiff Little Fingers tour tickets for the show of your favorite singer at the most affordable price. You may be sure that choosing our ticket service, you will not overpay and get the entrance ticket for the incredible performance, you were waiting for so long. We know everything about the way how a professional ticket service should work. So, with us, you’ll get the lowest Stiff Little Fingers ticket prices and the best places for the show.