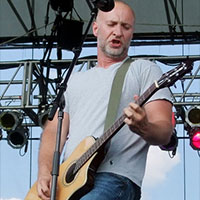 Bob Mould will be performing an event in the next dates is right in your area. Buy tickets for your favorite performer or group and you will be able to visit his show already tomorrow!

Share with friends:
Updated: 01-19-2022
Robert Arthur Mould is an American musician, principally known for his work as guitarist, vocalist, and songwriter for alternative rock bands Hüsker Dü in the 1980s and Sugar in the 1990s.

In 1996, Mould returned to solo recording, releasing a self-titled album in 1996 on Rykodisc, often referred to as Hubcap because of the cover photo. Mould played all of the instruments himself, and programmed the drums instead of using a real drummer. The album peaked at number 101 on the Billboard 200 chart, and number 1 on the Heatseekers chart. In 1998, Mould released The Last Dog and Pony Show, his final album on Rykodisc (who had released all of the Sugar albums in the U.S.). The album was named as such because Mould decided that the tour that followed would be his "last electric band tour."

His next solo album, Body of Song, had been originally scheduled to closely follow the release of 2002's Modulate. Instead, Mould worked on the album for the next three years, resulting in a 2005 release. By this time, he had changed his mind on touring with a band, and announced his first band tour since 1998. The tour lineup included bassist Jason Narducy (of Verbow), drummer Brendan Canty (of Fugazi), and Mould's Blowoff collaborator, Morel, on keyboards.

In addition to his solo work, Mould also worked as a live DJ in collaboration with Washington DC-area dance music artist Richard Morel, under the collective banner Blowoff. They frequently staged at the 9:30 Club in Washington, D.C. A Blowoff CD was released in September 2006, consisting of songs recorded together by the two. Mould has also done remixes for a variety of dance and alternative rock artists, including a remix of the Interpol song "Length of Love." District Line was released February 5, 2008. A little over a year later, on April 7, 2009, Mould released his next album entitled Life and Times in the midst of researching his life for an autobiography. Mould ultimately wrote that memoir with Michael Azerrad, the author of Our Band Could Be Your Life and Come as You Are: The Story of Nirvana. The book, See a Little Light: The Trail of Rage and Melody, was published in June 2011.

On August 6, 2012, Mould released the first single from his first album on Merge Records, Silver Age, on September 4, 2012. It peaked at #52 on the Billboard 200 album chart, #12 on the Alternative Albums chart, and #3 on the Tastemaker Albums chart. In 2014 Mould released Beauty & Ruin and in March 2016, his most recent album Patch the Sky was released. On October 25, 2018 Bob shared a new song, "Sunshine Rock" from his new album of the same name, arriving February 8, 2019 via Merge Records.

Looking for the cheapest concert tickets for the show of Bob Mould Tour 2023? If yes, then welcome to our portal offering a wide choice of either cheap of VIP tickets. Furthermore, we guarantee that here, you will definitely find so desired tickets for the performance of the Bob Mould 2022 Tour dates you adore.

The show of Bob Mould is worth seeing. You won’t regret because this talented person will gift you unforgettable emotions, help you forget about all problems and allow you to jump into the fantastic world of music for only one evening.

The primary target of our service is to offer Bob Mould tour tickets for the show of your favorite singer at the most affordable price. You may be sure that choosing our ticket service, you will not overpay and get the entrance ticket for the incredible performance, you were waiting for so long. We know everything about the way how a professional ticket service should work. So, with us, you’ll get the lowest Bob Mould ticket prices and the best places for the show.