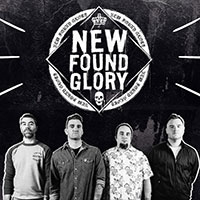 New Found Glory will be performing an event in the next dates is right in your area. Buy tickets for your favorite performer or group and you will be able to visit his show already tomorrow!

After forming in 1997, New Found Glory released their debut studio album Nothing Gold Can Stay in 1999. The band released their self-titled major label debut in 2000, with the album's song "Hit or Miss" peaking at number 15 the Alternative Songs chart. In 2002, the band became mainstream with their album Sticks and Stones and the album's hit "My Friends Over You". New Found Glory's popularity continued with their 2004 album Catalyst. The video for "All Down Hill From Here" was nominated for a VMA for Breakthrough Video of the Year. In 2006, they released the album Coming Home, which showed the band temporarily moving to an alternative rock style instead of their usual pop punk sound. The quintet returned to their energetic pop punk style with the release of Not Without a Fight in 2009. They have since released three more albums: Radiosurgery in 2011, Resurrection in 2014, and Makes Me Sick in 2017. Their tenth studio album Forever + Ever x Infinity will be released in May 29, 2020.

Emerging as part of the second wave of pop punk in the late 1990s, music critics consider them a key pioneer of the genre. Labelled the "godfathers of pop punk", AllMusic credits them for "practically serving alongside the work of Blink-182 as the blueprint to the entire genre for the early 2000s." They are also renowned for their energetic live performances.

On September 28, 2016, New Found Glory announced via Facebook that pre-production had officially began for a new album and have since been posting pictures showing the progress of the writing process. On January 25, 2017, the band's next album, Makes Me Sick was announced for release on April 28. The first single "Happy Being Miserable", along with its music video, was released on February 15, 2017. The influence for the music video came from the pie eating scene from the movie Stand By Me.

In January 2019, New Found Glory announced the third instalment of their cover series, the From the Screen to Your Stereo 3 EP, for release in May. On February 20, 2019 the band released the first song/video off their new cover series EP From The Screen To Your Stereo 3. They covered 'The Power Of Love' by Huey Lewis and The News, which comes from the Back To The Future movies. It was also revealed they'll be covering songs from Frozen, Rocky and Twilight on the new release.

On February 10, 2020, the band announced their tenth studio album Forever + Ever x Infinity, stated for release for May 29, 2020. The album will feature 15 songs, as the band didn't want to cut any of the recorded material for the album. The first single, called "Greatest Of All Time" was made available for listen the same day.

The show of New Found Glory is worth seeing. You won’t regret because this talented person will gift you unforgettable emotions, help you forget about all problems and allow you to jump into the fantastic world of music for only one evening.

The primary target of our service is to offer New Found Glory tour tickets for the show of your favorite singer at the most affordable price. You may be sure that choosing our ticket service, you will not overpay and get the entrance ticket for the incredible performance, you were waiting for so long. We know everything about the way how a professional ticket service should work. So, with us, you’ll get the lowest New Found Glory ticket prices and the best places for the show.