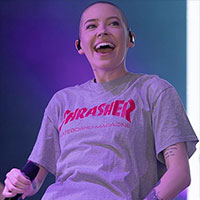 Bishop Briggs will be performing an event in the next dates is right in your area. Buy tickets for your favorite performer or group and you will be able to visit his show already tomorrow!

Share with friends:
Updated: 01-27-2023
Sarah Grace McLaughlin, better known as Bishop Briggs, is a British musician, singer, and songwriter. Her single "River" was a number three hit in the US Alternative chart and she released her debut album Church of Scars on 20 April 2018.

After moving to Los Angeles, Briggs wrote and played all over the city in any venue she could, eventually recording her first single "Wild Horses" in July 2015. Many listeners found Briggs via Shazam when seeing an Acura commercial which features the song. In late 2015, "Wild Horses" began climbing the charts again, entering the top 30 on the Billboard Alternative Songs chart and top 13 on the Billboard Twitter Emerging Artist charts.

In January 2016, Briggs released the single "River". The song was a commercial success. The song reached number 1 on Hype Machine's Popular charts and on Spotify's US Viral 50 and #2 on the Global Viral 50. It also received an Honorable Mention on Shazam's predicted Songs of the Summer 2016, which was featured in Billboard. "River" climbed into the top 3 on the 'Billboard Alternative Songs chart and top 10 on the Billboard Hot Rock, Rock Airplay and Twitter Emerging Artist charts.

In May 2016, she released her third single, "The Way I Do". She was the opening act for Coldplay in the fall of 2016 on nine of their tour dates, and also opened for Kaleo throughout their fall tour. Briggs made her television debut on 1 August 2016, performing "River" on The Tonight Show Starring Jimmy Fallon. She released her fourth single, "Pray (Empty Gun)" on 12 August 2016. The song was featured in the season 2 finale of the MTV show Scream. On 23 September 2016, Briggs released the single "Be Your Love". Her first physical release was a self-titled 12" vinyl EP in a limited-edition run of 1,200 copies, released on Record Store Day Black Friday in 2016.

In February 2018, Republic Records released Briggs' cover version of the 1988 INXS hit "Never Tear Us Apart" as a single cut from the soundtrack to the film Fifty Shades Freed, which she also sang as part of a duet on Season 16 of American Idol. Briggs' debut album, Church of Scars, was released on 20 April 2018.

In October 2019, Briggs released three songs as singles ("Champion", "Tattooed On My Heart" and "Jekyll & Hide") from her second studio album, Champion. In November, Briggs released the song "Someone Else" as part of the album. The album was then released on 8 November.

Looking for the cheapest concert tickets for the show of Bishop Briggs Tour 2024? If yes, then welcome to our portal offering a wide choice of either cheap of VIP tickets. Furthermore, we guarantee that here, you will definitely find so desired tickets for the performance of the Bishop Briggs 2023 Tour dates you adore.

The show of Bishop Briggs is worth seeing. You won’t regret because this talented person will gift you unforgettable emotions, help you forget about all problems and allow you to jump into the fantastic world of music for only one evening.

The primary target of our service is to offer Bishop Briggs tour tickets for the show of your favorite singer at the most affordable price. You may be sure that choosing our ticket service, you will not overpay and get the entrance ticket for the incredible performance, you were waiting for so long. We know everything about the way how a professional ticket service should work. So, with us, you’ll get the lowest Bishop Briggs ticket prices and the best places for the show.