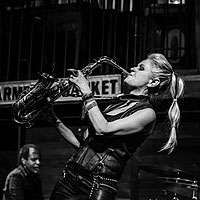 Mindi Abair will be performing an event in the next dates is right in your area. Buy tickets for your favorite performer or group and you will be able to visit his show already tomorrow!

Share with friends:
Updated: 05-25-2022
Mindi Abair is an American saxophonist, vocalist, author, and National Trustee for the National Academy of Recording Arts and Sciences, the organization that puts on the Grammy Awards show.

Her solo career has produced ten No. 1 radio singles, two No. 1 Billboard Jazz CDs, and four more solo CDs that have landed No. 5 and above on the Billboard Contemporary Jazz Charts. She was the featured saxophonist for the 2011 and 2012 seasons of American Idol, and performed with the rock band Aerosmith. Abair's recordings have twice been nominated for Grammy Awards.

On May 27, 2014, Abair released Wild Heart on Concord Records imprint, Heads Up International. The record debuted at No. 1 on the Billboard Jazz chart and No. 152 on the Billboard Top 200. The record, which included collaborations with the late Gregg Allman, Joe Perry and Trombone Shorty, was nominated for Best Contemporary Instrumental Album in the 2015 Grammy Awards.

Abair received the Mad Skills Award at the third annual She Rocks at NAMM Show (organized by NAMM, the National Association of Music Merchants) on January 24, 2015. Held in Anaheim, California, the event was founded by the Women's International Music Network.

In 2015, after working with Randy Jacobs (founder of The Boneshakers) on the tour for Wild Heart, he and Abair decided to form Mindi Abair and The Boneshakers, which includes Mindi Abair (saxophone, vocals), Randy Jacobs (guitar, vocals), Sweet Pea Atkinson (vocals), Rodney Lee (keyboards), Derek Frank (bass, vocals), and Third Richardson (drums, vocals). In late 2015, they released a live album Mindi Abair and The Boneshakers Live in Seattle via Pledge Music and HeadsUp, which featured a performance from Seattle's Dimitriou's Jazz Alley in February 2015. In summer 2017, the group announced their first studio project via Randy Jacobs' website. Recorded over five days at EastWest Studios with producer Kevin Shirley,The EastWest Sessions, included 11 blues and rock tracks, was released on September 15, 2017. Joe Bonamassa and Fantastic Negrito were featured guests. The album debuted at No. 3 on the Billboard Blues Albums Chart on the week of October 7, 2017.

"Pretty Good for a Girl," a tongue-in-cheek track co-written by Abair and Jacobs for the album, inspired Abair to launch the web platform PrettyGoodForAGirl.net. The goal of the website is to celebrate exceptional women and turn "pretty good for a girl" into a phrase of empowerment.

Abair featured on the 2011 American Idol season as a soloist with Paul McDonald and Casey Abrams and playing behind contestants Jacob Lusk and Haley Reinhart. Steven Tyler remarked to McDonald after her debut on the show "Forget you, who's your sax player?" Abair was featured on the 2012 American Idol season, performing with Phillip Phillips. Abair appeared with Phillips six times as a featured saxophonist, performing the songs "U Got It Bad" originally by Usher, "Disease" originally by Matchbox Twenty, "Have You Ever Seen the Rain?" originally by Creedence Clearwater Revival, "Movin' Out" originally by Billy Joel, "In The Midnight Hour" originally by Wilson Pickett and "Give A Little More" originally by Maroon 5. Tyler was so impressed with Abair that he invited her to join Aerosmith on the summer leg of their 2012 world tour playing sax and singing backing vocals.

She filled in as the saxophonist with the CBS Orchestra on the Late Show with David Letterman on April 3 and 4, 2012. She sat in with the band again on July 29, 2014, and she also performed her original songs "Wild Heart" and "Train." Abair has also appeared on The Tavis Smiley Show and more than once on The Tonight Show Starring Jimmy Fallon.

Looking for the cheapest concert tickets for the show of Mindi Abair Tour 2023? If yes, then welcome to our portal offering a wide choice of either cheap of VIP tickets. Furthermore, we guarantee that here, you will definitely find so desired tickets for the performance of the Mindi Abair 2022 Tour dates you adore.

The show of Mindi Abair is worth seeing. You won’t regret because this talented person will gift you unforgettable emotions, help you forget about all problems and allow you to jump into the fantastic world of music for only one evening.

The primary target of our service is to offer Mindi Abair tour tickets for the show of your favorite singer at the most affordable price. You may be sure that choosing our ticket service, you will not overpay and get the entrance ticket for the incredible performance, you were waiting for so long. We know everything about the way how a professional ticket service should work. So, with us, you’ll get the lowest Mindi Abair ticket prices and the best places for the show.