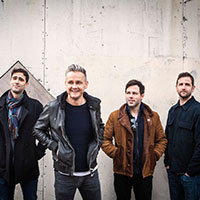 Keane will be performing an event in the next dates is right in your area. Buy tickets for your favorite performer or group and you will be able to visit his show already tomorrow!

Keane achieved mainstream, international success with the release of their debut album, Hopes and Fears, in 2004. Topping the UK charts, the album won the 2005 Brit Award for Best British Album and was the second best-selling British album of 2004. It is one of the best-selling albums in UK chart history. Their second album, Under the Iron Sea, released in 2006, topped the UK album charts and debuted at number four on the US Billboard 200. Their third album, Perfect Symmetry, was released in October 2008.

In May 2008, both Hopes and Fears (number 13) and Under the Iron Sea (number 8) were voted by readers of Q magazine as among the best British albums ever, with Keane, The Beatles, Oasis and Radiohead the only artists having two albums in the top 20. In 2009, Hopes and Fears was listed as the ninth best-selling album of the 2000s decade in the UK. Their EP, Night Train, was released in May 2010. Their fourth studio album, Strangeland, was released in May 2012, and peaked at number one on the UK Albums Chart.

Keane are known for using keyboards as the lead instrument instead of guitars, differentiating them from most other rock bands. The inclusion of a distorted piano effect in 2006 and various synthesisers were a common feature in their music which developed on the second and third albums. Keane have sold over 13 million records worldwide. The band released their fifth studio album Cause and Effect on 20 September 2019. It was announced on 6 June 2019 with the release of lead single "The Way I Feel". On 17 January 2019, an article from The Sun newspaper revealed that the band are planning "to make a comeback after six years away" and that "A source close to the rockers has revealed the band is ready to work together again after 'putting their differences to one side'".

On 6 February, Keane posted a new image of them together on their various social media accounts. This was followed by several announcements on their Instagram and Facebook sites of various festivals in which the band would perform at, including (in order of announced): "Cornbury Music Festival" (6 July 2019), "4ever Valencia Fest" in Spain (21 July 2019), "MEO Marés Vivas" festival in Portugal (19 July 2019), "Noches del Botánico" festival in Madrid (20 July 2019) and "Hello Festival" in The Netherlands (9 June).

On 15 March 2019, Keane performed their song "Somewhere Only We Know" on Comic Relief's Red Nose Day on BBC One with London Contemporary Voices. On 26 March 2019, Keane posted "We’ve been desperate to tell you that we’re busy making another album, which we’ll be releasing later this year." to their Facebook page.

On 17 May 2019, Keane released an extended play titled Retroactive EP1 featuring "our favourite archived live performances, older demos and random treasures". On 6 June 2019, the band released the first new single from Cause and Effect, entitled "The Way I Feel". On 16 June 2019, Keane performed a setlist at the Isle of Wight Fesitval, being the closing act of the event. On 14 July 2019, Keane did a set at the British Summer Time concert in Hyde Park.

The band released a vertical edition of the music video for "The Way I Feel" on 22 July 2019, followed by an AI-generated lyric video for the same song which dropped on July 2019. On 30 July 2019, Keane announced they would co-headline three performances in Mexico with the band Travis, having sets in Monterrey (13 November 2019), Guadalajara (15 November 2019), and at the Corona Capital Festival in Mexico City (16-17 November 2019). Also on this day, the band announced they would perform at "Espeaco Das Americas" in São Paulo on 1 December 2019. The band performed on the main stage at the "Lokerse Feesten" festival on 3 August 2019. The band streamed an acoustic session and interview on YouTube on 5 August 2019 at the Paste Studio in New York. On 6 August 2019, the band performed live "The Way I Feel" on NBC's The Today Show. Later that day, they also hinted at the release of their second single from "Cause and Effect" entitled "Love Too Much". On 8 August 2019, the second Cause and Effect single, "Love Too Much", was released for streaming and debuted on "The Breakfast Show" on BBC Radio 2. The music video for "Love Too Much" was also unveiled.

Looking for the cheapest concert tickets for the show of Keane Tour 2023? If yes, then welcome to our portal offering a wide choice of either cheap of VIP tickets. Furthermore, we guarantee that here, you will definitely find so desired tickets for the performance of the Keane 2022 Tour dates you adore.

The show of Keane is worth seeing. You won’t regret because this talented person will gift you unforgettable emotions, help you forget about all problems and allow you to jump into the fantastic world of music for only one evening.

The primary target of our service is to offer Keane tour tickets for the show of your favorite singer at the most affordable price. You may be sure that choosing our ticket service, you will not overpay and get the entrance ticket for the incredible performance, you were waiting for so long. We know everything about the way how a professional ticket service should work. So, with us, you’ll get the lowest Keane ticket prices and the best places for the show.