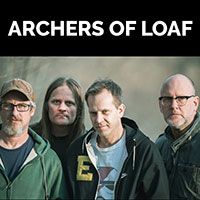 Archers of Loaf will be performing an event in the next dates is right in your area. Buy tickets for your favorite performer or group and you will be able to visit his show already tomorrow!

Share with friends:
Updated: 07-05-2022
Archers of Loaf is an American indie rock band originally formed in Chapel Hill, North Carolina, in 1991. The group toured extensively and released four studio albums, one compilation, numerous singles and EPs, and a live album which was released after the band broke up in 1998. In 2011 the band began a reunion tour that coincided with the reissue of four of its albums by Merge Records.

Singer/guitarist Eric Bachmann, guitarist Eric Johnson, bassist Matt Gentling, and drummer Mark Price, all originally from Asheville, NC, formed Archers of Loaf in the early 1990s. Eric Bachmann was a saxophone major at Appalachian State University before dropping out because he "didn't want to be a high school band director." Their initial release in 1992 was a 45" single, "Wrong" b/w "South Carolina" given away free with issue 1 of Stay Free! magazine. The band signed with Alias records and released their second single "Web in Front" which received moderate college radio airplay. It was also featured in a season five episode of Beavis and Butt-Head. They released their debut full-length album, Icky Mettle, in 1993. It was critically well received, with critic Robert Christgau awarding his second-highest rating of "A", and peaked at #18 on the CMJ New Music Monthly Top 150 Album charts, charting for 21 weeks. In the 2008 book The Pitchfork 500 named "Web in Front" one of the top 500 songs of recent decades.

Asked about the band's future plans, Bachmann did not rule out a new album, but noted that it is not something that is on the immediate horizon following the reunion tour. "The worst thing could do is force something out and have it be a bad version of something we already did. It's going to have to be a forward step. I don't want to recreate the 25-year-old kid writing the songs that I would do now with those three other guys, so we'd have to think that through. They're very good to work with, in that way. It's not out of the question, because everyone thinks the same way. No one wants to do 'Icky Mettle 2.'"

A live concert documentary What Did You Expect?, capturing the band's August, 2011 performances at The Cat's Cradle was released in 2012. The film was directed by Gorman Bechard. In 2015, the band released the double album Curse of the Loaf, which is the Brian Paulson produced concert audio from the documentary. The deluxe package also featured the original poster from the two nights at Cat's Cradle, as well as a copy of the film. In a 2018 interview with Eric Bachmann, he said all of the members of Archers of Loaf are on board with the idea of reforming and making a new record, saying "Oh yeah, everybody wants to do it — I just have to write the songs." In November 2019, the band posted a video on their YouTube channel entitled "The Return Of The Loaf," teasing toward new music. On February 20, 2020 the Archers of Loaf digitally released "Raleigh Days", their first new music since 1998.

The show of Archers of Loaf is worth seeing. You won’t regret because this talented person will gift you unforgettable emotions, help you forget about all problems and allow you to jump into the fantastic world of music for only one evening.

The primary target of our service is to offer Archers of Loaf tour tickets for the show of your favorite singer at the most affordable price. You may be sure that choosing our ticket service, you will not overpay and get the entrance ticket for the incredible performance, you were waiting for so long. We know everything about the way how a professional ticket service should work. So, with us, you’ll get the lowest Archers of Loaf ticket prices and the best places for the show.