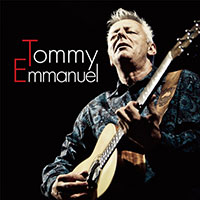 Tommy Emmanuel will be performing an event in the next dates is right in your area. Buy tickets for your favorite performer or group and you will be able to visit his show already tomorrow!

Share with friends:
Updated: 10-24-2021
William Thomas Emmanuel AM is an Australian guitarist, songwriter, and singer, best known for his complex fingerstyle technique, energetic performances, and the use of percussive effects on the guitar. Although originally a session player in many bands, Emmanuel has carved out his own style as a solo artist, releasing award-winning albums and singles. In the May 2008 and 2010 issues of Guitar Player Magazine, he was named "Best Acoustic Guitarist" in its readers' poll. In June 2010 Emmanuel was appointed a Member of the Order of Australia (AM). In 2011, Emmanuel was inducted into the Australian Roll of Renown.

Emmanuel and his brother Phil performed live in Sydney at the closing ceremony of the Summer Olympics in 2000. The event was televised worldwide with an estimated 2.85 billion viewers. In December 2007, he was diagnosed with heart problems and was forced to take a break from his hectic touring schedule due to exhaustion but returned to full-time touring in early 2008. In 2009 he worked with fellow local artists, Ray Burgess, Marty Rhone, John St Peeters and John "Swanee" Swan to release a single, "Legends of the Southern Land". In June 2010, Emmanuel was appointed a Member of the Order of Australia (AM). In 2012, Governor Steve Beshear awarded Emmanuel the state of Kentucky's honorific title of Kentucky Colonel. During a July 2019 concert he mentioned recently receiving American citizenship.

Emmanuel had said that even at a young age he was fascinated by Chet Atkins's musical style (sometimes referred to as Travis picking) of playing bass lines, chords, melodies, and harmonies simultaneously using the thumb and fingers of the right hand, achieving a dynamic range of sound from the instrument. Although Emmanuel's playing incorporates a multitude of musical influences and styles, including jazz, blues, bluegrass, folk and rock, this type of country finger-style playing is at the core of his technique. While Emmanuel has never had formal music training and does not read or write music, his natural musical ability, intrinsic sense of rhythm, and charisma gained him fans from all over the world. As a solo performer, he never plays to a set list and uses a minimum of effects onstage. He usually completes studio recordings in one take.

In his solo shows, he mainly plays guitars made by Maton, an Australian guitar manufacturer. He usually travels with two custom Maton EBG808 TE models and one TE1 model, both of which are Tommy Emmanuel artist signature models. He has played Maton guitars for most of his career and is somewhat of an ambassador to the company due to his long-standing association with the brand. Emmanuel is known for the battered and worn-down appearances of his guitars; a result of his dynamic, energetic playing and percussive techniques. One of his signature performances, for example, involves striking the whole body of the guitar in various places with his hands or a drummer's snare-drum brush to emulate the sound of a percussion kit.

Emmanuel often curls his left thumb around the neck of the guitar onto the fretboard to play some notes, rather than using only his fingers to play — contrary to how classical guitarists play, but not unusual for jazz and country guitarists. He frequently plays common three-finger chord shapes with just two fingers. He commonly uses a thumbpick, a flat pick (plectrum), his fingers, or a combination of these in his playing, a style known as hybrid picking. Amongst his trademark rapid virtuoso licks and cascading harmonic progressions, he often uses a technique that imitated an electric guitar's tremolo system on acoustic guitar — by pressing the palm of his right hand against the sound board of the guitar near the neck joint, while maintaining forward pressure with his left hand on the top of the headstock. The guitar neck slightly bends away from the body and consequently affects the pitch of the strings to achieve the desired sound.

Looking for the cheapest concert tickets for the show of Tommy Emmanuel Tour 2022? If yes, then welcome to our portal offering a wide choice of either cheap of VIP tickets. Furthermore, we guarantee that here, you will definitely find so desired tickets for the performance of the Tommy Emmanuel 2021 Tour dates you adore.

The show of Tommy Emmanuel is worth seeing. You won’t regret because this talented person will gift you unforgettable emotions, help you forget about all problems and allow you to jump into the fantastic world of music for only one evening.

The primary target of our service is to offer Tommy Emmanuel tour tickets for the show of your favorite singer at the most affordable price. You may be sure that choosing our ticket service, you will not overpay and get the entrance ticket for the incredible performance, you were waiting for so long. We know everything about the way how a professional ticket service should work. So, with us, you’ll get the lowest Tommy Emmanuel ticket prices and the best places for the show.