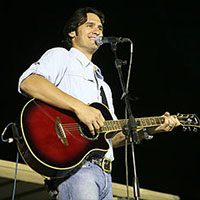 Joe Nichols will be performing an event in the next dates is right in your area. Buy tickets for your favorite performer or group and you will be able to visit his show already tomorrow!

Share with friends:
Updated: 01-27-2023
Joseph Edward Nichols is an American country music artist. Between 1996 and 2001, he held recording contracts with the Intersound and Giant labels. In 2002, he signed with Universal South Records, now known as Show Dog-Universal Music.

Nichols began his career with The Rodeo Band, playing in high school gymnasiums and small clubs. Throughout the course of his career, Nichols has released nine studio albums: Joe Nichols (1996), Man with a Memory (2002), Revelation, A Traditional Christmas (both 2004), III (2005), Real Things (2007), Old Things New (2009), Crickets (2013), and Never Gets Old (2017). These albums have produced over 14 Top 40 singles on the Billboard Hot Country Songs and Country Airplay charts, including the Number One singles "Brokenheartsville", "Tequila Makes Her Clothes Fall Off", "Gimmie That Girl", "Sunny and 75", and the RIAA GOLD-certified single "Yeah", as well as five other Top 10 entries. In October 2012, Nichols signed to Red Bow, a new partnership of Broken Bow Records and RED Distribution.

After parting ways with his longtime label, Nichols signed in October 2012 to Red Bow, a new partnership of Broken Bow Records and RED Distribution. On April 22, 2013, "Sunny and 75" premiered exclusively online at AOL's The Boot. The song was available on iTunes May 7, 2013. On Monday, May 13, it was announced that the song had the biggest country radio add week of his entire career, with 52 first week adds. It peaked at number one on the Country Airplay chart in December 2013. Nichols' eighth studio album, Crickets, was released on October 8, 2013. On January 9, 2014, it was announced that "Sunny and 75" was certified Gold by the RIAA for single sales in excess of 500,000 digital downloads. The album's second single, "Yeah", was released to country radio on January 27, 2014. It reached number one on the Country Airplay chart in July 2014. The album's third single, "Hard to Be Cool", was released to country radio on September 1, 2014. In 2014, he sang, together with Lucy Hale, the song "Red Dress", which appears on her album, Road Between.

It was announced on Nichols' website that the lead single to his ninth studio album, titled "Freaks Like Me", would be released to digital retailers on September 18, 2015, and to radio on September 21, 2015. Nichols released the new single "Undone" on May 12, 2016 and released his ninth studio album Never Gets Old on July 28, 2017 on Broken Bow Records. "Freaks Like Me" and "Undone" are not included on the new album. Joe parted ways with Broken Bow Music Group in August 2018.

Looking for the cheapest concert tickets for the show of Joe Nichols Tour 2024? If yes, then welcome to our portal offering a wide choice of either cheap of VIP tickets. Furthermore, we guarantee that here, you will definitely find so desired tickets for the performance of the Joe Nichols 2023 Tour dates you adore.

The show of Joe Nichols is worth seeing. You won’t regret because this talented person will gift you unforgettable emotions, help you forget about all problems and allow you to jump into the fantastic world of music for only one evening.

The primary target of our service is to offer Joe Nichols tour tickets for the show of your favorite singer at the most affordable price. You may be sure that choosing our ticket service, you will not overpay and get the entrance ticket for the incredible performance, you were waiting for so long. We know everything about the way how a professional ticket service should work. So, with us, you’ll get the lowest Joe Nichols ticket prices and the best places for the show.