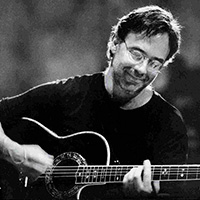 Al Di Meola will be performing an event in the next dates is right in your area. Buy tickets for your favorite performer or group and you will be able to visit his show already tomorrow!

Share with friends:
Updated: 02-09-2023
Al Laurence Di Meola  is an American guitarist. Known for his works in jazz fusion and world music, he began his career as a guitarist of the group Return to Forever in 1974. Between the 1970s and 1980s, albums such as Elegant Gypsy and Friday Night in San Francisco earned him both critical and commercial success.

He attended Berklee College of Music in the early 1970s. At nineteen, he was hired by Chick Corea to replace Bill Connors in the pioneering jazz fusion band Return to Forever with Stanley Clarke and Lenny White. He recorded three albums with Return to Forever, helping the quartet earn its greatest commercial success as all three albums cracked the Top 40 on the U.S. Billboard pop albums chart. He could play so fast, that he was sometimes criticized for playing too many notes. As Return to Forever was disbanding around 1976, Di Meola began recording solo albums on which he demonstrated mastery of jazz fusion, flamenco, and Mediterranean music. His album Elegant Gypsy (1977) received a gold certification. In 1980 he recorded the acoustic live album Friday Night in San Francisco with Paco de Lucía and John McLaughlin.

His early albums were influential among rock and jazz guitarists. Di Meola continued to explore Latin music within jazz fusion on Casino and Splendido Hotel. He exhibited a more subtle touch on acoustic numbers "Fantasia Suite for Two Guitars" from the Casino album and on the best-selling live album with McLaughlin and de Lucia, Friday Night in San Francisco. The latter album became one of the most popular live albums for acoustic guitar, selling more than two million copies worldwide.

With Scenario, he explored the electronic side of jazz in a collaboration with Jan Hammer (keyboardist with Fusion pioneers "Mahavishnu Orchestra," on albums with Jeff Beck, and later, composed the Miami Vice theme). Beginning with this change, he further expanded his horizons with the acoustic album Cielo e Terra. He began to incorporate the Synclavier guitar synthesizer on mid-1980s albums such as Soaring Through a Dream. By the 1990s, Di Meola recorded albums closer to world music and modern Latin styles than jazz. A notable exception was the 1991 album Kiss My Axe, which peaked at #2 on the US Contemporary Jazz Albums chart.

However, in 2006 he rediscovered his love of the electric guitar, and the DVD of his concert at the Leverkusen Jazz Festival 2006 is subtitled Return to Electric Guitar.

Looking for the cheapest concert tickets for the show of Al Di Meola Tour 2024? If yes, then welcome to our portal offering a wide choice of either cheap of VIP tickets. Furthermore, we guarantee that here, you will definitely find so desired tickets for the performance of the Al Di Meola 2023 Tour dates you adore.

The show of Al Di Meola is worth seeing. You won’t regret because this talented person will gift you unforgettable emotions, help you forget about all problems and allow you to jump into the fantastic world of music for only one evening.

The primary target of our service is to offer Al Di Meola tour tickets for the show of your favorite singer at the most affordable price. You may be sure that choosing our ticket service, you will not overpay and get the entrance ticket for the incredible performance, you were waiting for so long. We know everything about the way how a professional ticket service should work. So, with us, you’ll get the lowest Al Di Meola ticket prices and the best places for the show.