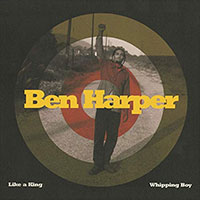 Ben Harper will be performing an event in the next dates is right in your area. Buy tickets for your favorite performer or group and you will be able to visit his show already tomorrow!

Share with friends:
Updated: 01-27-2023
Benjamin Chase Harper is an American singer-songwriter and multi-instrumentalist. Harper plays an eclectic mix of blues, folk, soul, reggae, and rock music and is known for his guitar-playing skills, vocals, live performances, and activism. He has released twelve regular studio albums, mostly through Virgin Records and has toured internationally. Harper is a three-time Grammy Award winner and seven-time nominee, with awards for Best Pop Instrumental Performance and Best Traditional Soul Gospel Album in 2004 and Best Blues Album in 2013. At the 40th Blues Music Awards ceremony, Harper's joint composition with Charlie Musselwhite, "No Mercy In This Land", was named as 'Song of the Year'.

At the age of 12, Harper played his first gig. During the 1980s, in his teen years, Harper began to play the slide guitar, mimicking the style of Robert Johnson. Harper refined his style, taking up the Weissenborn slide guitar. Harper broke out of the Inland Empire after being offered an invitation by Taj Mahal to tour with the artist. They recorded Taj Mahal's album Follow the Drinking Gourd, released in November 1990, and toured Hawaii.

In 1992, Harper recorded the LP Pleasure and Pain with folk multi-instrumentalist Tom Freund. After this limited edition record, Harper secured a lifetime record deal with Virgin Records, which released his debut album, Welcome to the Cruel World in 1994. This allowed him to be invited at the Rencontres Trans Musicales of Rennes in France in December 1993 where he went up for the first time on a large stage.

Harper has four albums and one single that have been certified Gold by the RIAA. Burn To Shine/Virgin, Fight For Your Mind/Virgin, Live From Mars/Virgin, Diamonds On The Inside/Capitol-Virgin and You Found Another Lover/Stax (single). On 12 February 2016, Harper released (as a YouTube video) his new single "Call It What It Is", first track taken from his upcoming new studio album Call It What It Is due to be released on 8 April 2016.

On 8 April 2019, Harper performed as a guest artist on the seventeenth season of American Idol during the second night of the “Top 20 Duets” episode. Harper sang with contestant Alejandro Aranda, playing "There Will Be a Light". At the 40th Blues Music Awards ceremony, Harper's joint composition with Charlie Musselwhite, "No Mercy In This Land", was named as 'Song of the Year'. On March 20, 2019, Mavis Staples announced a new album 'We Get By', featuring eleven tracks written and produced by Harper. The title track, which features Harper on vocals and in the music video, was released on May 15, 2019.

Looking for the cheapest concert tickets for the show of Ben Harper Tour 2024? If yes, then welcome to our portal offering a wide choice of either cheap of VIP tickets. Furthermore, we guarantee that here, you will definitely find so desired tickets for the performance of the Ben Harper 2023 Tour dates you adore.

The show of Ben Harper is worth seeing. You won’t regret because this talented person will gift you unforgettable emotions, help you forget about all problems and allow you to jump into the fantastic world of music for only one evening.

The primary target of our service is to offer Ben Harper tour tickets for the show of your favorite singer at the most affordable price. You may be sure that choosing our ticket service, you will not overpay and get the entrance ticket for the incredible performance, you were waiting for so long. We know everything about the way how a professional ticket service should work. So, with us, you’ll get the lowest Ben Harper ticket prices and the best places for the show.