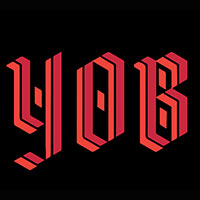 YOB will be performing an event in the next dates is right in your area. Buy tickets for your favorite performer or group and you will be able to visit his show already tomorrow!

Share with friends:
Updated: 01-27-2023
Yob (stylized as YOB) is an American doom metal band from Eugene, Oregon, composed of singer/guitarist Mike Scheidt, bassist Aaron Rieseberg, and drummer Travis Foster. Their most recent album Our Raw Heart was released in June 2018.

Before founding YOB, Scheidt had been a bass guitarist with the hardcore bands Chemikill, Dirty Sanchez, and H.C. Minds. Scheidt switched to guitar and vocals and founded YOB in 1996 with bassist Lowell Iles and drummer Greg Ocon. The band's self-titled demo was submitted to Stonerrock.com in 1999. In 2001, YOB recorded its first full-length record for 12th Records in Spokane, Washington, entitled Elaborations of Carbon. By this time, Isamu Sato (of the bands H.C. Minds and Thrombus) had joined on bass and drummer Gabe Morley (of the bands Fingertrap and Lightweight) had joined on drums.

In 2002, YOB secured a recording contract with Abstract Sounds. Their first album for this label, Catharsis, had stronger production and three songs lasting 50 minutes. After its release, drummer Morley was replaced by Travis Foster. YOB's third full-length release, The Illusion of Motion, was released on Metal Blade Records in 2004, and their fourth album The Unreal Never Lived was released by Metal Blade in 2005.

In 2008, Scheidt and Foster reformed YOB with the intention of performing a few live shows and releasing a new album. Bassist Aaron Rieseberg joined the band in 2009, having previously played in the band Norska with his older brother Dustin. The Great Cessation was released by Profound Lore Records in 2009. The band also appeared in Europe at the 2010 Roadburn Festival in the Netherlands. YOB has since toured the United States extensively, alongside bands including Graves at Sea, Lamont, Tummler, Dove, Orange Goblin, Origin, Exhumed, The Locust, The Accüsed, Botch, Isis, Soilent Green, Uphill Battle, Playing Enemy, Will Haven, Dark Castle, Tool, and Ghostride.

The album Atma was released in 2011. In February 2014, YOB signed with Neurosis's record label Neurot Recordings. The album Clearing the Path to Ascend was released in September 2014 and attracted widespread acclaim, particularly from Rolling Stone. In early 2017, Scheidt suffered a serious health scare, which inspired the next YOB album. Our Raw Heart was released by Relapse Records in June 2018.

Looking for the cheapest concert tickets for the show of YOB Tour 2024? If yes, then welcome to our portal offering a wide choice of either cheap of VIP tickets. Furthermore, we guarantee that here, you will definitely find so desired tickets for the performance of the YOB 2023 Tour dates you adore.

The show of YOB is worth seeing. You won’t regret because this talented person will gift you unforgettable emotions, help you forget about all problems and allow you to jump into the fantastic world of music for only one evening.

The primary target of our service is to offer YOB tour tickets for the show of your favorite singer at the most affordable price. You may be sure that choosing our ticket service, you will not overpay and get the entrance ticket for the incredible performance, you were waiting for so long. We know everything about the way how a professional ticket service should work. So, with us, you’ll get the lowest YOB ticket prices and the best places for the show.