We Were Promised Jetpacks Tickets 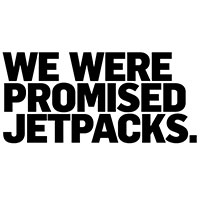 We Were Promised Jetpacks will be performing an event in the next dates is right in your area. Buy tickets for your favorite performer or group and you will be able to visit his show already tomorrow!

Share with friends:
Updated: 01-27-2023
We Were Promised Jetpacks are a Scottish indie rock band from Edinburgh, formed in 2003. The band consists of Adam Thompson (vocals, guitar), Sean Smith (bass), and Darren Lackie (drums). Stuart McGachan (keyboards, guitar) was a member of the band from 2012 to 2015. On 2 July 2019 Michael Palmer (guitar) announced that he was leaving the band.

The band's debut album, These Four Walls, was released on 15 June 2009 on Fat Cat Records. In October 2011 the band released their second full-length album, In the Pit of the Stomach. They released E Rey: Live in Philadelphia, a recording of the last show of their 2012 tour, in February 2014. The band's third album, Unravelling, was released in October 2014.

In March 2018 the band began recording their fourth album. The album, titled The More I Sleep The Less I Dream, was released on 14 September 2018. The band has cited label mates Frightened Rabbit and The Twilight Sad as influences, alongside Biffy Clyro's early material.
Thompson also cited Scotland itself as a major influence on their music: "It's rainy and miserable in Scotland and there are lots of angry people. In a way, that's a big part of why our music sounds the way it does. It's music that sounds sort of like that".

After the band revealed that they changed labels to Big Scary Monsters, they announced their fourth album, and it was released on 14 September 2018. As the members matured, the band collectively feared losing the playfulness that made them indie rock critic's favorites. Instead of fighting that dread, the band channeled it into the most refined, mature record to date. The band members have been playing together since their teenage years, and were all turning 30 which influenced the process and sound of the music. The album was recorded in early 2018 with producer Jonathan Low (The National, Sufjan Stevens, Kurt Vile, the War on Drugs) at Minor Street in Philadelphia and Long Pond in New York's Hudson Valley. Prior to that it took them a while to write the right songs, as they essentially wrote an album and decided they didn't like any of it; threw the material away to make the album that was released. The band's official press release on the album describes the album as: "The More I Sleep The Less I Dream marks a new chapter in We Were Promised Jetpacks' career. It's about going back to the heart of who they are, a high school band that never stopped. It's about four people who have grown up together, making a conscious choice to keep writing music and seeing where that takes them".

The show of We Were Promised Jetpacks is worth seeing. You won’t regret because this talented person will gift you unforgettable emotions, help you forget about all problems and allow you to jump into the fantastic world of music for only one evening.

The primary target of our service is to offer We Were Promised Jetpacks tour tickets for the show of your favorite singer at the most affordable price. You may be sure that choosing our ticket service, you will not overpay and get the entrance ticket for the incredible performance, you were waiting for so long. We know everything about the way how a professional ticket service should work. So, with us, you’ll get the lowest We Were Promised Jetpacks ticket prices and the best places for the show.