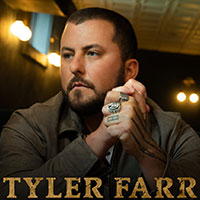 Tyler Farr will be performing an event in the next dates is right in your area. Buy tickets for your favorite performer or group and you will be able to visit his show already tomorrow!

Share with friends:
Updated: 01-19-2022
Tyler Lynn Farr is an American country music singer and songwriter. Originally signed to BNA Records, Farr released two singles for the label before it closed. He then transferred to Columbia Records Nashville, for which he has released two albums: Redneck Crazy in 2013 and Suffer in Peace in 2015. Overall, he has charted eight singles on the Billboard Hot Country Songs and Country Airplay charts. His highest ranking on the latter is "A Guy Walks Into a Bar", which placed at No. 1 in 2015.

Tyler Farr grew up in Garden City, Missouri and attended Missouri State University with degree in voice. Farr co-wrote the songs "Hey Y'all" for Cole Swindell and "She's Just Like That" for Joe Nichols. In early 2012, Farr released his debut single, "Hot Mess", which he co-wrote with Rhett Akins. Billy Dukes of Taste of Country gave the song four stars out of five, calling Farr's voice "unique, but not distracting." Following the merger of his original label, BNA Records, Farr moved to Columbia Nashville to release his second single, "Hello Goodbye". His third single, "Redneck Crazy", became his first Top 10 hit in 2013. After it came the top 3 hit "Whiskey in My Water". All four singles were included on his debut album, Redneck Crazy, which was released on September 30, 2013.

Farr led off his second album in mid-2014 with "A Guy Walks Into a Bar". The album, entitled Suffer in Peace, was released on April 28, 2015 and "A Guy Walks Into a Bar" became Farr's first No. 1 single on Billboard Country Airplay in May 2015. The album's second single, "Withdrawals" released to country radio on June 15, 2015. It had only reached number 52 on the Country Airplay chart before it was pulled from radio and "Better in Boots" was issued as a third single on August 17, 2015. The decision to change the single was made in order to give Farr an up-tempo, "female friendly" song that he could sing live, according to Steve Hodges of Sony Nashville. "Our Town", Farr's eighth single release, was issued in late 2016. Singer Seth Ennis co-wrote the song. In September 2018 Farr parted ways with Sony Music Nashville. In March 2019 Farr signed with Broken Bow Records.

Farr is also a classically trained opera singer and took voice lessons during his teenage years, singing tenor in Missouri's All-State Choir during his senior year of high school. He claims he discovered (and fell in love with) country music after his mother married George Jones' touring guitarist.

Looking for the cheapest concert tickets for the show of Tyler Farr Tour 2023? If yes, then welcome to our portal offering a wide choice of either cheap of VIP tickets. Furthermore, we guarantee that here, you will definitely find so desired tickets for the performance of the Tyler Farr 2022 Tour dates you adore.

The show of Tyler Farr is worth seeing. You won’t regret because this talented person will gift you unforgettable emotions, help you forget about all problems and allow you to jump into the fantastic world of music for only one evening.

The primary target of our service is to offer Tyler Farr tour tickets for the show of your favorite singer at the most affordable price. You may be sure that choosing our ticket service, you will not overpay and get the entrance ticket for the incredible performance, you were waiting for so long. We know everything about the way how a professional ticket service should work. So, with us, you’ll get the lowest Tyler Farr ticket prices and the best places for the show.