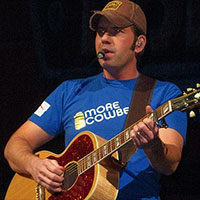 Rodney Atkins will be performing an event in the next dates is right in your area. Buy tickets for your favorite performer or group and you will be able to visit his show already tomorrow!

Share with friends:
Updated: 08-10-2022
Rodney Allan Atkins is an American country music singer and songwriter. Signed to Curb Records in 1996, he charted his first single on the Billboard country chart in 1997, but did not release an album until 2003's Honesty, which included the number 4 hit "Honesty (Write Me a List)".

If You're Going Through Hell, his second album, was released in 2006. Its first two singles, "If You're Going Through Hell (Before the Devil Even Knows)" and "Watching You", each spent four weeks at the top of the country music chart, and were respectively ranked as the top country songs of 2006 and 2007 according to Billboard Year-End. The album, which has since been certified platinum in the United States, produced two more number 1 singles in "These Are My People" and "Cleaning This Gun (Come On In Boy)". It's America (2009) included the number 1 single "It's America" and the top 5 hit "Farmer's Daughter", which was added to a later reissue of the album. Take a Back Road (2011) produced his sixth number 1 in its title track, and 2019's Caught Up in the Country set a record for the longest run on the country singles charts with its title track. Atkins has received six nominations from the Academy of Country Music and two from the Country Music Association, winning Top New Male Vocalist from the former in 2006.

Atkins's debut single, "In a Heartbeat", spent one week at number 74 on the Billboard Hot Country Singles & Tracks (now Hot Country Songs) chart dated for August 30, 1997. One of the song's cowriters was Brian Gowan, who was also recording on Curb at the time as one-half of Blake & Brian. Its b-side, "God Only Knows", was also released as a single, but did not chart. His debut album was slated for release on September 17 of the same year, but it was never released due to Atkins' dissatisfaction with his material. He discussed his dissatisfaction while sitting next to Curb Records owner Mike Curb on an airplane; Curb allowed him to switch producers, and Atkins chose Ted Hewitt, with whom he had been working on demos. Hewitt also changed Atkins' style from a cowboy appearance and a vocal style similar to Roy Orbison to a more polished appearance. Atkins, Hewitt, and Max T. Barnes wrote the track "Don't Think I Won't" on Mark Wills' 1998 album Wish You Were Here, but he was otherwise inactive until 2002. "In a Heartbeat" later appeared on the soundtrack of the 2008 film Camille.

In September 2013, Atkins released the single "Doin' It Right", which peaked at 53 on the Country Airplay chart. It was followed in October 2014 by "Eat Sleep Love You Repeat", which was co-written by Walker Hayes and Ryan Bizarri. The latter song appears on Atkins' Greatest Hits compilation, released in February 2015. This album also includes ten of his previous singles, plus the album cut "About the South" from If You're Going Through Hell.

In 2018, Atkins released a new single titled "Caught Up in the Country", which features the Fisk Jubilee Singers on backing vocals. This is the first single from an album of the same name, released via Curb on May 10, 2019. As with his other albums, Hewitt again serves as producer. The album includes a song written about Atkins' grandmother-in-law. "Caught Up in the Country" spent 57 weeks on the Country Airplay charts, setting a new record for the longest continuous run on that chart in May 2019. On August 21, Rodney Atkins released a second single titled, "Thank God for You".

Looking for the cheapest concert tickets for the show of Rodney Atkins Tour 2023? If yes, then welcome to our portal offering a wide choice of either cheap of VIP tickets. Furthermore, we guarantee that here, you will definitely find so desired tickets for the performance of the Rodney Atkins 2022 Tour dates you adore.

The show of Rodney Atkins is worth seeing. You won’t regret because this talented person will gift you unforgettable emotions, help you forget about all problems and allow you to jump into the fantastic world of music for only one evening.

The primary target of our service is to offer Rodney Atkins tour tickets for the show of your favorite singer at the most affordable price. You may be sure that choosing our ticket service, you will not overpay and get the entrance ticket for the incredible performance, you were waiting for so long. We know everything about the way how a professional ticket service should work. So, with us, you’ll get the lowest Rodney Atkins ticket prices and the best places for the show.